In addition to his wars in Iraq, Afghanistan, Pakistan, those underway in Yemen and Somalia – and coming soon in Iran – the warlord Obama is now dispatching troops to Uganda to do battle with the wacky yet murderous Lord’s Resistance Army (LRA). 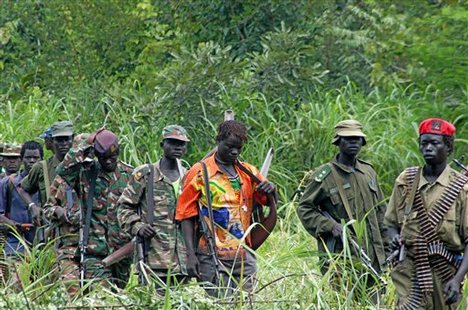 Obama’s move follows on the heels of Gaddafi’s defeat in Libya. He is following to the letter a well-drafted globalist plan for Africa, one that is partially enumerated in the the LRA Disarmament and Northern Uganda Recovery Bill adopted by the U.S. Congress in 2009 and signed by Obama in early 2010. It “requires the US government to develop a new multifaceted strategy” against the LRA.

“Obama has said he is sending about 100 US soldiers to Uganda to help regional forces battle the notorious Lord’s Resistance Army,” the BBC reported on Friday. “Although combat-equipped, the troops would be providing information and advice ‘to partner nation forces,’ Mr Obama wrote in a letter to US Congress.”

Obama didn’t bother to consult Congress or abide by the Constitution. He just sent congressional leaders a letter announcing he would again violate the national sovereignty of yet another country.

“Obama’s announcement represents a highly unusual intervention for the United States,” reports the Associated Press. “Although some American troops are based in Djibouti [at the $6 billion Africom mega-base] and small groups of soldiers have been deployed to Somalia, the U.S. traditionally has been reluctant to commit forces to help African nations put down insurgencies.”

As usual, the exact opposite is the case – the U.S. military, the CIA, and their European partners manufacture insurgencies – the preferred destabilization method for the bankers.

The AP dredges up the “humanitarian crises” of Rwanda and Bosnia as cover for Obama’s move. “The change in policy could reflect the long-standing concerns of a number of high-ranking Obama advisers left scarred by the U.S. failure in the 1990s to intervene to stop the genocide in Rwanda and the belated action to finally halt the violence in Bosnia. For a current parallel, the Lord’s Resistance Army’s 24-year campaign of rebellion, rape and murder represents one of the world’s worst human rights crises today.”

Despite the brutality of the LRC, the AP has naturally declined to tell us the whole story. Uganda is a strategic asset for the United States. Back in 2005, investigative journalist Wayne Madsen reported that the U.S. had major communications and listening stations in Uganda’s Ruwenzori Mountains. Since then, Africom has set-up a sprawling operation there. Libya was its first “engagement.”

Moreover, the genocide in Rwanda was not simply blood lust between Tutsi and Hutu tribes, as dramatically depicted by the media at the time, but was ignited by several causes, most notably the intervention of the IMF in central Africa’s economy and its standard debt serving schemes resulting in famine and armed conflict, thus allowing the globalists to consolidate power.

“While the new loans [distributed to Rwanda] contributed to releasing money for the payment of debt servicing as well as equipping the armed forces, the evidence would suggest that a large part of this donor assistance was neither used productively nor was it channeled into providing relief in areas affected by famine,” writes Michel Chossudovsky.

In what is now a well-established pattern, the global elite exploited tensions created by the disastrous economic impact of its loan sharking operation and moved to establish a sphere of influence in a region historically dominated by the former colonial powers of France and Belgium.

“The civil war in Rwanda was a brutal struggle for political power between the Hutu-led Habyarimana government supported by France, and the Tutsi Rwandan Patriotic Front (RPF) backed financially and militarily by Washington,” Chossudovsky concludes. “Ethnic rivalries were used deliberately in the pursuit of geopolitical objectives. Both the CIA and French intelligence were involved.”

The IMF and World Bank played a cynical and murderous game in Uganda as well. Banker money ostensibly earmarked for the country’s economic and social reconstruction went to military destabilization operations in Rwanda and the Congo.

The Congo: A mineral rich prize for the globalists.

“The Ugandan external debt was being used to finance these military operations on behalf of Washington with the country and its people ultimately footing the bill. In fact by curbing social expenditures, the austerity measures had facilitated the reallocation of State of revenue in favor of the Ugandan military,” Chossudovsky explains.

The LRC threat, cited on Friday in Obama’s less than obligatory letter to Congress, has been amplified by the presence of Africom in the country. “Critics have argued that not enough was done to protect civilians from the LRA rebels, who hacked, bludgeoned and bayoneted their way through nearby villages as they fled the joint military operation involving troops from Congo, Uganda and Sudan” under Africom direction, Stars and Stripes reported in 2009.

Africa is one of several targets of the globalists as they move to grab vital natural resources, consolidate power and unleash their monetary enslavement and world totalitarian government end game around the world. Remarkably, the self-destructive hubris of the elite is revealing itself as they attempt to accomplish overly ambitious goals in the Middle East, Central and South Asia, and Africa.

In their arrogance, the international banksters believe their engineered destruction of national economies and aggressive military destabilization plans simultaneously unleashed around the world will result in a situation where humanity will be obliged to crawl to them and beg for world government, as globalist minion Henry Kissinger intimated back in the 1990s.

In fact, as the growing but as of yet largely untutored “Occupy” movements reveal, a growing number of people in the West – in the belly of the beast, so to speak – are beginning to mobilize in resistance, despite the color revolution counter moves by the global elite and their intelligence apparatus to defuse the movement. At this point, it remains to be seen if the people can successfully identify the target and act coherently in opposition.