In a 2007 article from the London Guardian titled, “Bush handed blueprint to seize Pakistan’s nuclear arsenal,” it is stated that fears of destabilization inside Pakistan might prompt the United States to occupy Islamabad and the provinces of Punjab, Sindh, and Baluchistan in an attempt to secure Pakistan’s nuclear warheads. Behind this report is Fredrick Kagan, brother of the equally sloven Robert Kagan of the Foreign Policy Initiative, yet another contrived, corporate fueled warmongering think-tank.

While the sense of self-importance these degenerates shower upon themselves may seem comical, with titles like “senior fellow” and “resident scholar,” the fact that their “policy research” usually becomes corporate subsidized “policy reality” and subsequently the American people’s unending nightmare, is enough reason to keep tabs on them. For instance Fredrick Kagan was supposedly the architect behind the US troop surge in Iraq. And while we may kid ourselves that with Obama taking office the agenda of these supposed Neo-Conservatives is sidelined, Paul Wolfowitz’ plan to overthrow the nations of the Middle East, now being fully executed with US-funded revolutions, probably couldn’t have been done without the veil of “left-cover.”

What Kagan leaves out is the very source of this destabilization and America’s overall grand strategy in the region. America’s continued presence in Afghanistan as well as its increasingly aggressive “creep” over the Afghan-Pakistani border has been justified under the ambiguous and omnipresent threat of “terrorism.” In reality, the true goal is to contain the rise of China and other emerging economies using the pretense of “terrorism.” Destabilization via foreign-funded ethnic insurgencies, regime change via foreign-funded sedition, and a regional strategy of tension between power brokers in Beijing, New Delhi, and Islamabad have for years attempted to keep in check not just China and Pakistan’s rise, but India’s as well.

This is not merely speculative conjecture. China itself has recently accused the United States of directly attempting to destabilize their nation as well as using the pretense of “terrorism” as a means to hobble China’s growing influence. In an April 2011 Reuters report, it was stated that “a senior domestic security official, Chen Jiping, warned that “hostile Western forces” — alarmed by the country’s rise — were marshalling human rights issues to attack Party control.” Compounding China’s accusations are open admissions by the US State Department itself declaring that tens of millions will be spent to help activists circumvent China’s security networks in an effort to undermine Beijing. This comes after it has been revealed that the entire “Arab Spring” was US-funded.

The issue of Pakistan in regards to China is not merely a figment of a paranoid Beijing’s imagination, it is stated policy circulating throughout America’s corporate-funded think-tanks. Selig Harrison of the Soros funded Center for International Policy has published two pieces specifically calling for carving off of Pakistan’s Baluchistan province, not as part of a strategy to win the “War on Terror,” but as a means to thwart growing relations between Islamabad and Beijing.

In “Free Baluchistan,” he explicitly calls to “aid the 6 million Baluch insurgents fighting for independence from Pakistan in the face of growing ISI repression.” He continues by explaining the various merits of such meddling by stating, “Pakistan has given China a base at Gwadar in the heart of Baluch territory. So an independent Baluchistan would serve U.S. strategic interests in addition to the immediate goal of countering Islamist forces.”

In a follow up article titled, “The Chinese Cozy Up to the Pakistanis,” Harrison begins by stating, “China’s expanding reach is a natural and acceptable accompaniment of its growing power—but only up to a point. ” He then repeats his call for meddling in Pakistan by saying, “to counter what China is doing in Pakistan, the United States should play hardball by supporting the movement for an independent Baluchistan along the Arabian Sea and working with Baluch insurgents to oust the Chinese from their budding naval base at Gwadar. Beijing wants its inroads into Gilgit and Baltistan to be the first step on its way to an Arabian Sea outlet at Gwadar.” 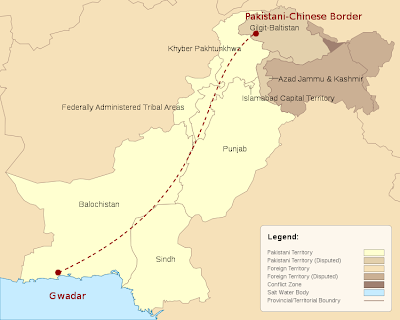 Gwadar in the southwest serves as a Chinese port, the starting
point for a logistical corridor through Pakistan and into Chinese
territory. The plan is to plunge the entire nation into chaos and use
US forces to systematically “help” restore order. (click to enlarge)

The very suggestion of fomenting armed violence simply to derail sovereign relations between two foreign nations is scandalous and reveals the absolute depths of depravity from which the global elite operate from. It is quite clear that the “War on Terror” is but a pretense to pursue a policy of regional hegemony with the expressed goal of containing China. This in turn, is part of a greater strategy covered in the 2006 Strategic Studies Institute report “String of Pearls: Meeting the Challenge of China’s Rising Power across the Asian Littoral.” Throughout the report China’s growing influence and various means to co-opt and contain it are discussed. SSI makes special note to mention engaging with all of China’s neighbors in an effort to play them off against Beijing in order to maintain American preeminence throughout Asia.

In addition to the Gwadar port in Pakistan’s Baluchistan region, China has also built dams, roads, and even nuclear power plants in the country. China has also supplied Pakistan with a tremendous amount of military technology. The only cards America seems to have left in its hand to counter this growing relationship are threats of destabilization, the subsequent stripping of Pakistan’s nuclear arsenal, and Pakistan’s Balkanization into smaller, ineffectual states.

In a 2009 article by Seymour Hersh titled, “Defending the Arsenal,” much attention was given to the immense amount of suspicion and distrust Pakistan views America with. In particular, distrust is garnered over America’s obsession with “defending” Pakistan’s nuclear arsenal. Under the pretense of “helping” Pakistan if ever it fell into chaos, America has been trying to ascertain the location of Pakistan’s nuclear weapons as well as the trigger assembles kept separate as a security measure.

While America supposedly “fears” destabilization, concurrently, the effects of their war with the Taliban on the Afghan-Pakistan border has overtly stirred up instability inside Pakistan. At one point, Hersh describes Islamabad’s request for predator drones to conduct the attacks themselves, which was denied. They then asked for America to at least pretend to have given the drones to Pakistan and give them Pakistani markings – this was also denied. In fact, it seems almost as if the war against the Taliban, especially the drone campaign, is being used specifically to stir up the Pashtun minority and aim them at Islamabad, just as Harrison had suggested the Baluchistan insurgents be used to carve off Pakistan’s southwest coastal region.

This brings us back to Fredrick Kagan’s “blueprint,” which is summed up in a New York Times piece co-authored with Brookings Institution’s Michael O’Hanlon. Their article titled, “Pakistan’s Collapse, Our Problem,” describes the complete collapse of the Pakistani government, overrun by “extremists.” It goes on to describe “Pro-American moderates” within the Pakistani army in need of US forces to help them secure Islamabad and their nuclear arsenal. Several options are given for where the nuclear weapons could be stored safely, all of them involve US oversight. This would give the US an ideal geopolitical scenario that would permanently Balkanize the country along Pashtun, Baluchi, and other ethnic minority lines, and result in a permanent Western presence inside the country.

The article then goes on to say larger military operations to take back Balkanized sections of the country could be undertaken, “If a holding operation in the nation’s center was successful, we would probably then seek to establish order in the parts of Pakistan where extremists operate. Beyond propping up the state, this would benefit American efforts in Afghanistan by depriving terrorists of the sanctuaries they have long enjoyed in Pakistan’s tribal and frontier regions.”

It should be noted that co-author Michael O’Hanlon also contributed to the “Which Path to Persia?” report which described how using foreign-funded armed insurgency, foreign-funded popular revolutions, co-opting members of the military, and covert military operations could be used to topple Iran’s government. In Iran’s case, this plan has already gone operational. In Pakistan’s case it seems all but a foregone conclusion that it is at least being attempted.

If Kagan’s plan were executed after sufficient instability and justification had been created, China’s holdings in Pakistan would be entirely eliminated, with Pakistan itself becoming a permanent extension of the unending US occupation of Afghanistan. This explains China’s initial reaction to the “Bin Laden” hoax. Immediately recognizing the unfolding implications, China rushed to Islamabad’s defense calling for support from the international community for Islamabad. China also criticized America’s intrusion into Pakistan’s sovereign territory.

The US raid incensed the Pakistani people, attempted to drive a wedge between the military and the government, as well as gave rhetorical leverage to the US over Islamabad and the Pakistani military. The suggestion by the US that “Bin Laden” had a support network inside Pakistan’s military appears to be an initial attempt to usher in some form of Kagan’s “nuke-napping” invasion plan. With Beijing openly accusing the US of interfering in its internal affairs and with the “Arab Spring” quickly turning into regional warfare, there is no turning back for the globalists.

The corporate-financier oligarchs and their many helping hands are a degenerate elite who have spent their entire lives sheltered from the consequences of their actions. It has always been the soldiers and the taxpayers who bore the brunt for their delusions of grandeur. To them, war is a cost-benefit analysis, and like their financial pyramid schemes that only get bigger and bigger, so too their gambles with our lives and treasure. It appears that they are quite willing to destabilize Pakistan, a nation with 170 million people, and risk war, a nuclear exchange, and a possible confrontation with China and Russia in the process.