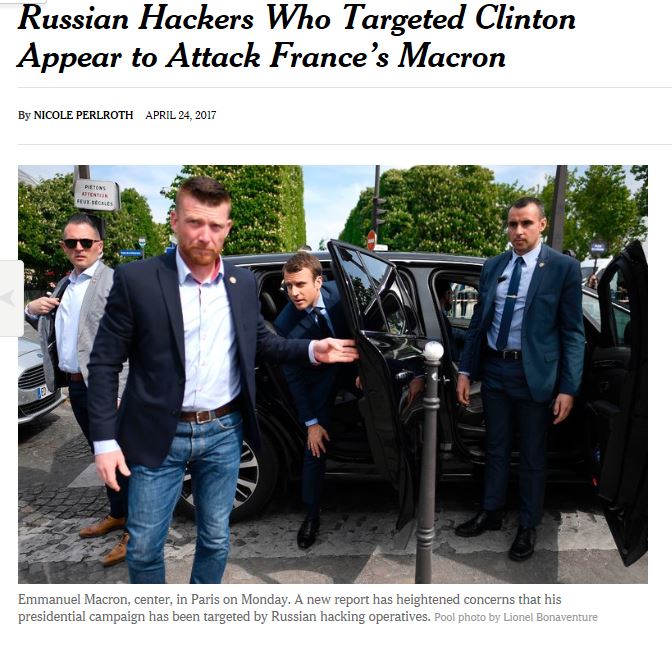 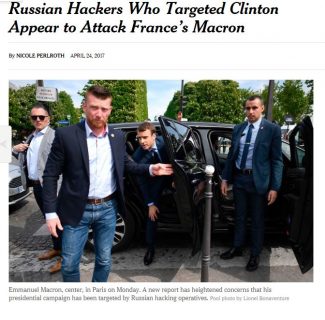 Trend Micro claims the hackers began registering several decoy internet addresses mimicking the name of Macron’s party, En Marche; one address was named “onedrive-en-marche.fr” while the other was named “mail-en-marche.fr.”

Researchers say the decoy web addresses were registered to a block of web addresses belonging to a Russian intelligence unit they refer to as Pawn Storm, also known as Fancy Bear, APT 28, or the Sofacy Group.

Pawn Storm is the same entity blamed by American intelligence officials for the hacking of the Democratic National Committee last year, as well as attempted hacks of German Chancellor Angela Merkel’s Christian Democratic Union (CDU) in May and June 2016, and the Konrad Adenauer Stiftung, a foundation associated with the CDU, earlier this month.

The cyberattacks were, according to Macron campaign digital director Mounir Mahjoubi, the “invisible side” of a concerted effort by Russia to hurt Macron’s campaign in favor of his opponent, National Front candidate Marine Le Pen.

“Russia, or at least its state-controlled media, clearly favored Ms. Le Pen, who criticized European Union sanctions imposed on Russia after it annexed Crimea in 2014 and voiced support for Moscow’s intervention in Syria to prop up President Bashar al-Assad,” claimed The New York Times.

It is worth noting that the recent WikiLeaks data drop of CIA cyber-warfare documents, dubbed “Vault 7,” revealed information that the CIA maintains a substantial library of Russian cyber-attack techniques “stolen” from malware produced in other states, including Russia, in a project identified as “Umbrage.”

The effort to tie Marine Le Pen to Russia with highly suspect evidence is a concerted attempt by Macron, and the globalists who support him, to discredit her campaign in much the same way the far-left, deep state, and the mainstream media have attempted to discredit President Donald Trump.