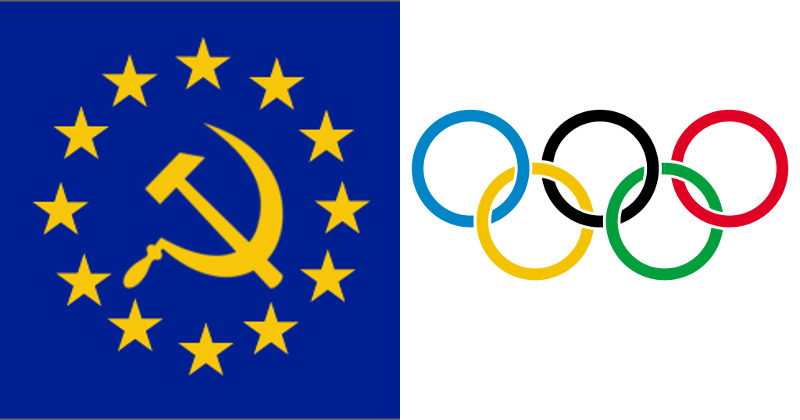 European Union officials and their allies are using the 2024 Olympic games, which are likely to be held in Paris, as an opportunity to consolidate power and ‘solidarity’ within the bloc – even planning to fly the EU flag on the medals podium.

EU Parliament president Antonio Tajani disclosed the plot at a confab in Brussels this week, saying EU competitors will “win as Europeans” and should represent the entire superstate in their victories.

“So that’s the idea that I’d like to launch, that’s the parliament’s idea with the backing of all the national federations.”

Paris has been pushing hard behind a bid to host the 2024 Games, and new reports indicate that they will likely be successful, offering the EU an opportunity to implement a broader scheme that encompasses the new flag procedure.

“It’s not just about a French candidacy, it’s about a European bid as I see it and that’s why really we have to promote this endeavour on behalf of Paris,” revealed Tajani. “For Europe this is a major opportunity to show off our most beautiful cities.”

“Everybody knows Paris will project a good image on behalf of the European Union.”

In 1980, the summer Olympics were also hosted by a superstate – the USSR.

While the Olympics take place in a single nation, with a high-profile city serving as ground zero for the event, the unelected EU bureaucrats hope to transform that custom by turning the ‘Paris Games’ into the ‘European Games,’ thus forcing a sense of ‘solidarity’ into the increasingly unpopular EU project, and possibly coercing cities from other countries into participating in the costly hosting and security obligations – a massive expense often shouldered heavily by taxpayers, and one that is likely to be unprecedented given the escalation of terrorist attacks on the continent.

The move towards merging European athletes under the EU umbrella was given broader public exposure during the 2016 Rio Olympics when a German PR firm – which lists the European Commission and European Parliament as their top clients – released a version of the ‘medal tracker’ showing the European Union at the top, having incorporated post-Brexit UK athletes into the final totals alongside winners from EU member states.

French officials are fully on-board with the EU’s machinations, with president Emmanuel Macron’s new sports minister, former Olympian Laura Flessel, announcing, “The thing that we’re hoping for is that on the 13th of September it will be the European and French games.”

Macron himself is reportedly very enthusiastic about the plans, as well, and his own win in this year’s presidential election was openly supported by the Paris 2024 Olympic bid committee.

During Macron’s victory celebration, he chose to make his triumphant entry to the soundtrack of the EU anthem instead of the French national anthem, signaling to the world where his true allegiance lies – with open borders globalists and their war on national sovereignty, traditions, and culture.