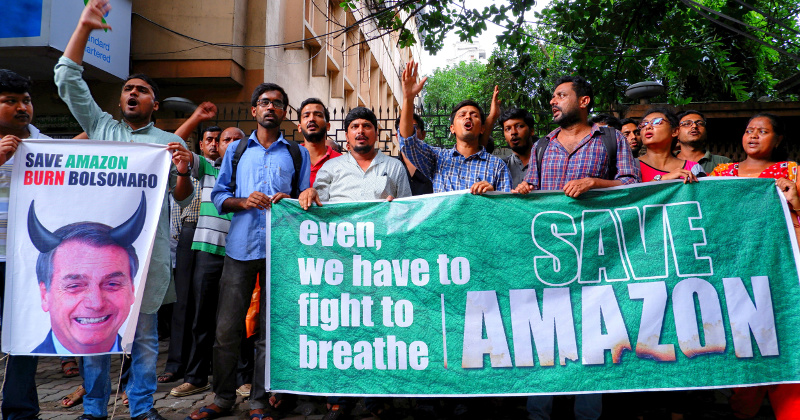 International political opponents of Brazilian President Jair Bolsonaro and their media allies are cynically exploiting and exaggerating the impact of the fires in the Amazon to demonize the ‘Trump of the Tropics.’

The plight of the Brazilian rainforest hasn’t dominated the international headlines to the current extent since the late 1980s heyday of Sting earnestly pleading for donations while standing alongside impassive tribal chiefs.

Leonardo Di Caprio, Madonna, and Cristiano Ronaldo have taken to social media to sound alarm about the burning “lungs of the world” that produce “20 percent of Earth’s oxygen.”

Emmanuel Macron not only stated the same claims in his own tweet, but made the “international crisis” of the Amazon fires the last-minute headline theme of his home G7 summit, urging the world to #ActFortheAmazon, as the leaders of the top Western powers pooled together $40 million in (rejected) donations.

Our house is burning. Literally. The Amazon rain forest – the lungs which produces 20% of our planet’s oxygen – is on fire. It is an international crisis. Members of the G7 Summit, let’s discuss this emergency first order in two days! #ActForTheAmazon pic.twitter.com/dogOJj9big

Surely, something extraordinary is happening in Brazil?

Well, not really. First let’s clear out the straightforward myths. The Amazon does not produce 20 percent of the world’s oxygen, nor is it the “lungs” of anything, as it consumes as much of it as it creates. In the internet era it should be easy to debunk this within three minutes, without requiring special statements from NASA scientists.

Nor does it help to post decades-old pictures with fires from various places across the globe, which is something every person namechecked above has done. One assumes, particularly because of their boss’ stated dislike of ‘fake news’, that there must be someone on the French president’s staff who is able to perform a Google image search.

OK, but the fires are still bad? Not in historic terms. In the past twenty years, ten of them have had more fire hotspots than 2019, and as recently as 2010 there were nearly three times as many fires in Brazil. This is not spurious or contested data, but information straight from INPE, the very agency Bolsonaro attacked for being alarmist earlier this summer.

In fact, there are actually bigger fires going on around the world right now, for example across the same latitudes in Africa. Nearby Bolivia has had spectacular rainforest blazes of its own, all passing with nary a mention.

Meanwhile, if we take the fires – many of which are annual and controlled, started to clear future agricultural land – as a proxy for deforestation in the Amazon, the panic appears even more disproportionate. The peak deforestation rates happened in the early 2000s, before new conservation legislation was introduced, and the amount of rainforest annually cut down in recent years is less than a quarter of the figure in 2004.

So, what has changed in 2019? On January 1 this year, Bolsonaro was inaugurated as president, after defeating his socialist rival Fernando Haddad in an election in September last year.

He was labelled a destroyer of the Amazon by his domestic rivals long before he had signed a single edict in office, or shaken hands with Donald Trump.

Along with the customary “far-right” label, the purported threat he poses to the Amazon has been the prime angle of attack on him by the international media for the past year, with a constant drip-drip of articles based on little more than statements from activists and his political opponents, served up as news.

What we are witnessing this month is the culmination of a deliberate campaign – call it propaganda, information war or fake news – executed at the highest level. What is ordinary has been turned into headlines. False statements have been allowed to go unchallenged. Useful context has been deliberately stripped away to create an incorrect picture and actively misinform.

While it is tempting to blame useful idiot celebrities for doing this, it is not them pushing the narrative. It is the centrist political leaders and pliable media outlets synching in perfect harmony to attack Bolsonaro. Because of his own nationalist beliefs, due to his association with Trump, and as a proxy for the US president himself.

Amazing also is the cultural arrogance with which Macron and the others have executed this. Rather than consulting with Brazil, the world’s fifth most populous country and eighth biggest economy, the G7 club unilaterally declared what they thought was best for it. The New York Magazine gleefully celebrated a “glimpse” of a new “climate world order” in which Western countries would punish whichever countries would be seen to be violating the environmental agenda with sanctions and international ostracism.

I am not usually sympathetic to cries of neo-colonialism – so often used by leaders around the world to cover for their own present-day sins – but this time Brazil really was treated as a “colony or no man’s land,“ to quote its president. There has barely been any consideration of how Brazilians themselves want to develop the Amazon in the long run, or even standard reports on whether it is doing anything itself to tackle the fires (it is). One guesses that the lungs are not a sentient organ.

None of the above is to say that the Amazon rainforests are unimportant, or that they won’t be threatened by Bolsonaro’s desire to up the intensity of the rural economy. But even the most devoted environmentalist or Trump-hater should be wary of swallowing whole, what is essentially, an agenda-driven hoax. A nakedly political power move masquerading as benevolent environmentalism.

Gerald Celente breaks down the immigration crisis and how it will play into the next big economic collapse.