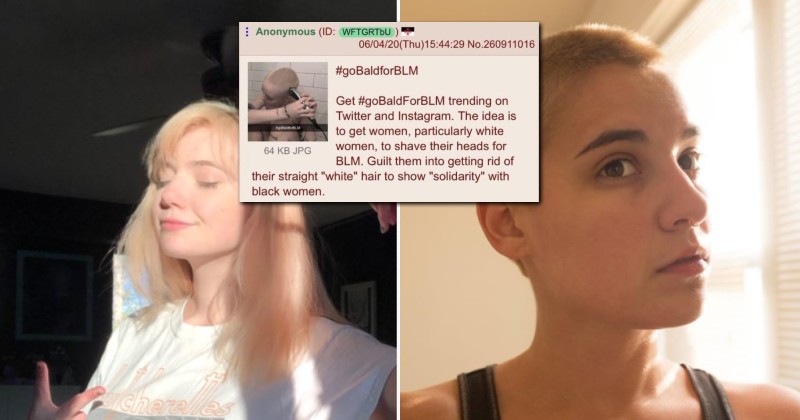 With white women more desperate for attention than ever before, some of them followed through with the #GoBaldForBLM challenge, shaving their heads for Black Lives Matter despite the fact that the entire stunt appears to have been the result of a 4chan troll.

#GoBaldForBLM has been trending on Twitter all day, and while much of the hashtag is dominated by people questioning its authenticity, some women do appear to have fallen for it.

“The only thing I care about today, tomorrow and in the future is #blacklivesmatter. #goBaldforBLM,” tweeted one woman alongside a picture of her shaved head.

The only thing I care about today, tomorrow and in the future is #blacklivesmatter. #goBaldforBLM #ChicagoProtests pic.twitter.com/KaVQTppr4d

Several other women posted images of themselves with shaved heads in a show of solidarity for BLM.

However, the hashtag appears to have been a stunt cooked up by 4chan trolls.

A post on the notorious website states, “Get #goBaldForBLM trending on Twitter and Instagram. The idea is to get women, particularly white women, to shave their heads for BLM. Guilt them into getting rid of their straight “white” hair to show “solidarity” with black women.”

4chan has successfully trolled leftists into believing all manner of absurd things in the past, including them introducing the idea that the ‘OK’ hand sign was code for white supremacist.

The #GoBaldForBLM Twitter hashtag was subsequently spammed by K-pop fans in an effort to hijack it, but for some women the damage was already done and that hair is going to take a while to grow back.