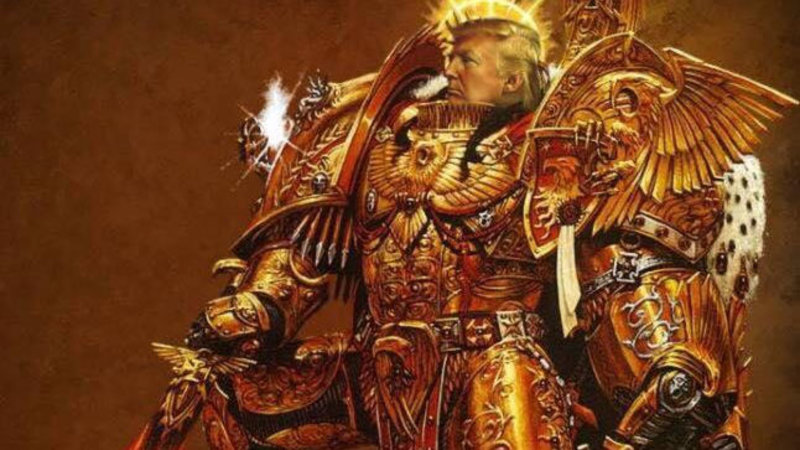 A massive Trump float made its debut at a parade in Italy over the weekend.

The float’s sculptor, Fabrizio Galli, says while he’s proud of his work, the project was actually meant to portray Trump in a negative light.

In coverage from Italian media, translated into English on YouTube, Galli discussed the meaning of the structure’s sword:

“I think I have reached one of the highest points of my career… Well no doubt, that is he brandishes this weapon of the economy, it says ‘Dazi Vostri’ (approx. ‘here’s your f***ing tariffs’), it’s a joke, but in fact he’s trying to destroy nations with the economy instead of nuclear missiles. This is one of the strongest actions, let’s say, that powerful people like Trump can use.”

Excerpts of what the announcers say in the report have also been provided by Heavy.com:

“Here’s the carriage, maybe the only first-class one to tackle politics. … This is great, immense, enormous figure by Fabrizio Galli, who wanted to remind us of what I mentioned before, Trump’s presidency and the anniversary of the Moon landing, of those astronauts that in 1978 made our hearts skip a beat. … And yes, Fabrizio Galli again brings forward a political theme, tied to international politics. Last year he won third place with his ‘Crystal Peace,’ which referenced the threat of nuclear war and the US-North Korea dispute. This year he brings this monumentally large carriage dedicated to the character of Trump wearing this sort of sci-fi armor, yeah? It’s a Trump who even wants to … reach Mars with this Space Marine army. … This armor that Trump’s wearing is referencing a character of a 3D sci-fi game called Warhammer… I can even see a laurel crown, resembling Rome’s own Caesar. So it’s combining Roman tradition with this sci-fi character, and this frowning Trump wants to even conquer space, conquer Mars…”

“The carriage is built around the central figure, there are no secondary subjects, only a very imposing central subject … He’s moving, animating, turning around, and it’s very detailed… Much space is given to the actors as well who are playing these Space Marines. By the way, he took Trump’s most frequent expression, the one we see on TV. Well yes, compared to the previous chubby, sly Trump that wanted to go to the Moon, this Trump is a threatening one who looks toward the future with a serious gaze, very threatening let’s say. … It looks like it’s strutting among the crowd… Here we are in the middle of all these warriors in front of the majestic Donald Trump…”

The papier-mâché structure pays homage to the God Emperor Trump meme, which depicts the 45th president in a suit of armor similar to those worn by “Space Marine” characters in a video game titled Warhammer 40K.

It’s also an apparent reference to the Space Force military division the president wants to create, according to a tweet from Galli.