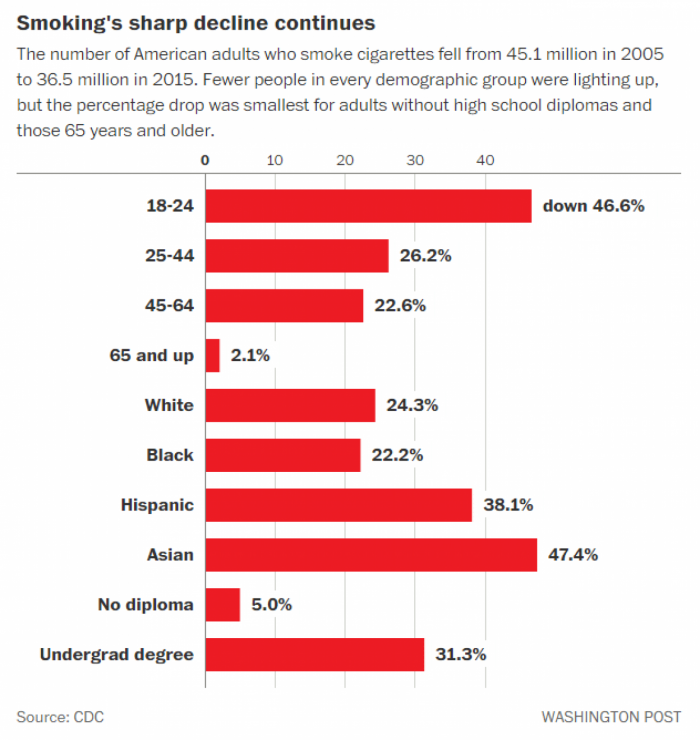 But the good news comes with 1 major caveat: smoking still causes 40% of all cancer diagnoses in the United States. Not just lung cancer, either. That percentage encompasses a dozen other parts of the body, including the throat, stomach, pancreas, and liver.

U.S. Centers for Disease Control (CDC) director Tom Frieden said the latest data shows how tobacco use remains “a persistent and preventable health threat.” There are still 36 million smokersin the U.S., and Frieden said that “nearly half could die prematurely from tobacco-related illnesses, including 6 million from cancer, unless we implement the programs that will help smokers quit.”

Read: Quit Smoking Tips that go Beyond the Patch, Pill, or Phone Support

However, in a separate report, the CDC’s Morbidity and Mortality Weekly Report shows that the U.S. has made great strides in reducing smoking over the past decade. From 2005 to 2015, smoking among adults declined from 20.9% to, or 45.1 million, to 15.1%, or 36.5 million. In the last year alone, the overall smoking rate fell 1.7 percentage points, resulting in the lowest prevalence since the CDC began collecting data in 1965.

“The smoking rate is almost 1/3 of what it was in 1965. This is remarkable progress, and as a nation, we have seen some of the health benefits. However, tobacco use still accounts for an unacceptably high number of cancer diagnoses and deaths each year, especially lung cancer, which accounts for more than 126,000 deaths each year.” [2]

Read: Smoking can Permanently Damage DNA – but Quitting can Heal Some Wounds

There are large disparities among different groups, according to Frieden. More men than women smoking, especially African-American men, as well as among those who report experiencing psychological stress. People who did not graduate from high school and poor individuals also have higher smoking rates. [1]