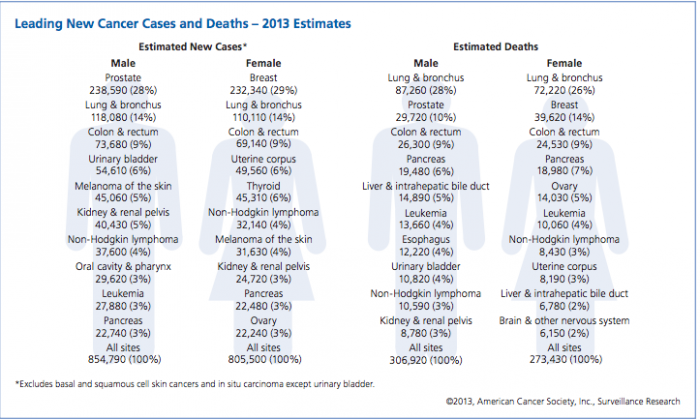 Deaths from cancer in the United States peaked in 1991, but have since dropped a whopping 25%, according a report published earlier this year by the American Cancer Society (ACS). [1]

As a result of that drop, 2.1 million fewer people died from cancer between 1991 and 2014 than would have died if cancer death rates had remained stagnant at their 1991 level.

The ACS credits reductions in smoking and advances in early detection and treatment for the significant decline, such as more people having colonoscopies to detect colorectal cancer.

Dr. Otis Brawley, the chief medical officer of the American Cancer Society, said in a statement:

“The continuing drops in the cancer death rate are a powerful sign of the potential we have to reduce cancer’s deadly toll.

Continuing that success will require more clinical and basic research to improve early detection and treatment, as well as strategies to increase healthy behaviors nationwide.” [1]

The report, published in the journal CA: A Cancer Journal for Clinicians, shows the decline in cancer death rates was fairly steady for more than two decades, decreasing about 1.5% each year during the study period. [1]

Read: Study: Moderate Exercise May Cut Your Risk of 13 Types of Cancer!

Fewer deaths attributable to four types of cancer played a significant role in the overall decline – lung, prostate, breast, and colorectal. For example, deaths from lung cancer in men dropped by 43% from 1990 to 2014, and in women by 17% between 2002 and 2014. The colorectal cancer death rate decreased by 51% between 1976 and 2014.

Cases of new liver cancer diagnoses and deaths are increasing, according to the researchers. The number of new cases has grown by 3% yearly, and liver cancer deaths rose by 3% annually between 2010 and 2014.

Additionally, deaths from uterine cancer are on the rise, increasing by 2% per year in that period.