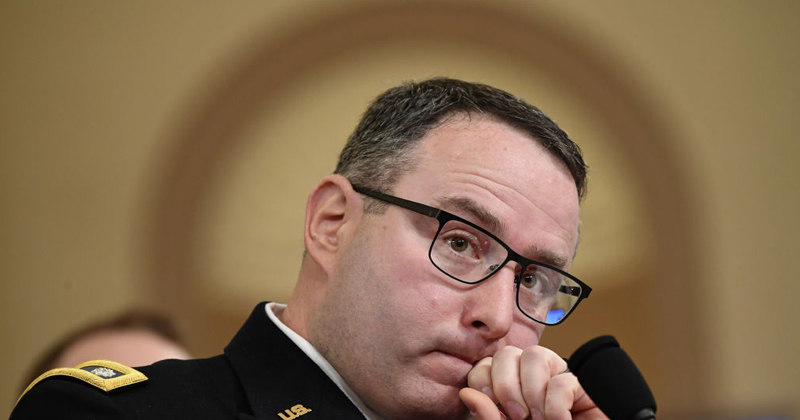 In a statement on Friday, Vindman’s lawyer David Pressman said the lieutenant colonel “was asked to leave for telling the truth. The truth has cost LTC Alexander Vindman his job, his career and his privacy.”

Pressman claimed “the most powerful man in the world — buoyed by the silent, the pliable, and the complicit decided to exact revenge” on Vindman.

Vindman testified to the House about listening to the July 25 phone call between President Trump and Ukrainian President Volodymyr Zelenksy, admitting he did not have concerns whether it was illegal or a crime, but that he found it morally wrong.

He said it was “improper for the president of the United States to demand a foreign government investigate a U.S. citizen and political opponent.”

Additionally, Vindman contradicted his own closed-door testimony when he took the stand for the House inquiry.

During the House testimony, the disgraced colonel declared he wouldn’t expose the infamous “whistleblower” (Eric Ciaramella) but he previously said he didn’t even know whistleblower’s identity.

While liberal media outlets and politicians will predictably throw a fit over this move, canning Deep State Swamp Creatures like Vindman is exactly why patriots voted Trump into office.