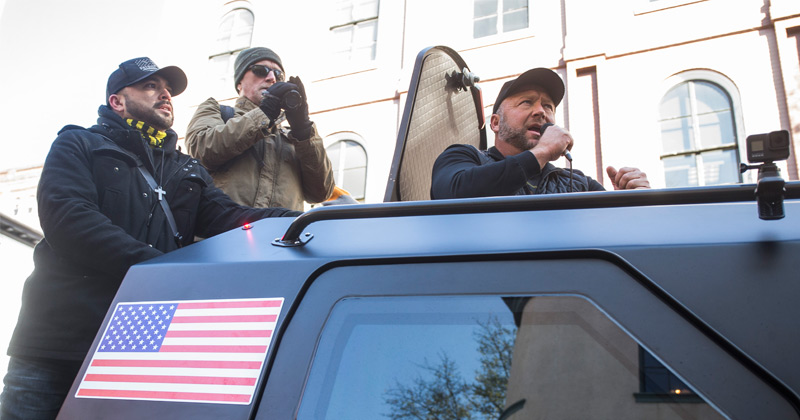 The Infowars Android app has been removed from the Google Play Store, allegedly for comments that Alex Jones made about the coronavirus pandemic.

The Infowars app had been available on Google’s Play Store, where it had been downloaded more than 100,000 times by Android users. The app allows users to watch live broadcasts of the Alex Jones Show, read articles posted on the site, and access the Infowars store.

The app was removed on Friday, allegedly for comments that Jones had made during a broadcast that questioned the approach that world governments have taken to combating the coronavirus pandemic, including quarantines, lockdowns and social-distancing measures.

Jones told National File that the ban came after he discussed the use of hydroxychloroquine, zinc, and strong antibiotics to treat coronavirus. Jones noted that the possible coronavirus treatment was popularized by President Donald Trump, and also discussed by Tucker Carlson, Sean Hannity, and Laura Ingraham.

Speaking exclusively to National File, Jones said the ban is a “beta test” to see if Big Tech can successfully ban individuals and news companies for criticizing lockdowns and for discussing promising treatments for coronavirus.

“The fact is they were saying in the news that Trump shouldn’t be a doctor, and all of these Democrat governors are banning hydroxychloroquine, when it’s a known treatment that’s very, very promising and is already being used in Europe,” said Jones.

Jones added, “I got banned for reading an article about how Fauci and the NIH said it was a promising drug and should be prescribed. Fauci even said he would prescribe it to patients.”

Jones also noted that, despite the ban, the Android app is still available for smartphones through the Infowars website, and encouraged listeners and viewers to download it there.

Jones also released a video statement on the ban:

The Big Tech companies are currently cracking down on so-called “misinformation” about the coronavirus outbreak. Earlier this month, Facebook, Google, YouTube, LinkedIn, Microsoft, Reddit, and Twitter, issued a joint statement saying they were working together to “combat fraud and misinformation”:

We’re helping millions of people stay connected while also jointly combating fraud and misinformation about the virus, elevating authoritative content on our platforms, and sharing critical updates in coordination with government healthcare agencies around the world. We invite other companies to join us as we work to keep our communities healthy and safe.

“Now more than ever, combating misinformation on the Play Store is a top priority for the team,” a Google spokesperson told WIRED. “When we find apps that violate Play policy by distributing misleading or harmful information, we remove them from the store.”

The Infowars app lasted much longer on Google’s platform than it did on the iPhone. The app’s removal from Apple’s App Store occurred in late August 2018, where it was banned for allegedly violating policies that prevented apps from publishing content that is “offensive, insensitive, upsetting, intended to disgust or in exceptionally poor taste.”

Alex Jones breaks down the recent decision by Google to ban another Alex Jones app from their Play store for exposing the Dems blocking potential coronavirus treatments, ushering in the era of digital book burning.