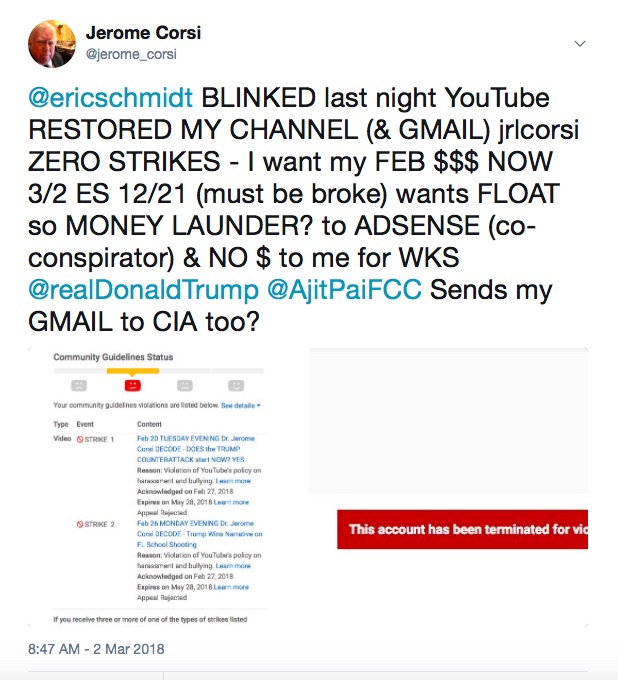 The quick reversal of policy suggested Google and YouTube were preparing to wave the white flag of surrender in their purge to remove conservatives and libertarians from the Internet, after the public announcement that YouTube had invited the infamous hate-mongering Southern Poverty Law Center onto the campus to police political discourse on the website.

The tension built when Drudge Report published an article by Gizmodo that reported correctly that before terminating the channel, YouTube first removed two videos from Dr. Corsi’s YouTube account, citing violations of community standards for “harassment” and “bullying,” without providing any further specifics of the charges.

Expressing apparent pleasure that a conservative voice had been censored off YouTube, Gizmodo wrote the following, predicting Corsi’s abrupt cancellation with prejudice prefaced a similar fate for Alex Jones and Infowars.com:

“Corsi’s ban reads as a prelude to a possible termination for InfoWars’s entire YouTube presence. Videos attacking or undermining the credibility of Parkland shooting victims have put two strikes on that channel, leading many to speculate the conspiracy operation run by Alex Jones may not have long left on the internet’s largest video-sharing site, though for the time being two biggest channels associated with InfoWars, Alex Jones (2.2m subscribers) and editor-at-large Paul Joseph Watson (1.1m subscribers), remain accessible.”

Immediately following the YouTube termination, Corsi notified followers via Twitter that he was opening a new account at Gab where he intended to resume posting commentary and video as early as next week.

By Friday morning, Corsi had approximately 8,000 followers on Gab, while his restored YouTube account grew to 33,000 subscribers. 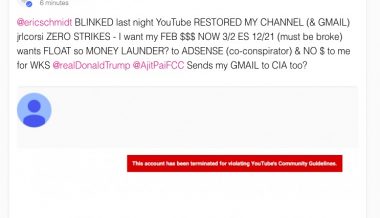 Corsi also tweeted that the funds from his YouTube activity YouTube appeared to be withholding when his account was canceled Thursday will now be used by YouTube for approximately three more months while Google under current policies absconds with the float.

Among Corsi’s many tweets and posts on Gab over his being thrown off YouTube, Corsi made numerous pleas that the subject of creating an Internet Bill of Rights (#InternetBillofRights) be taken up by Congress, as well as by the Federal Communications Commission, FCC, and the Federal Trade Commission, FTC, two of the most important federal agencies regulating the Internet.