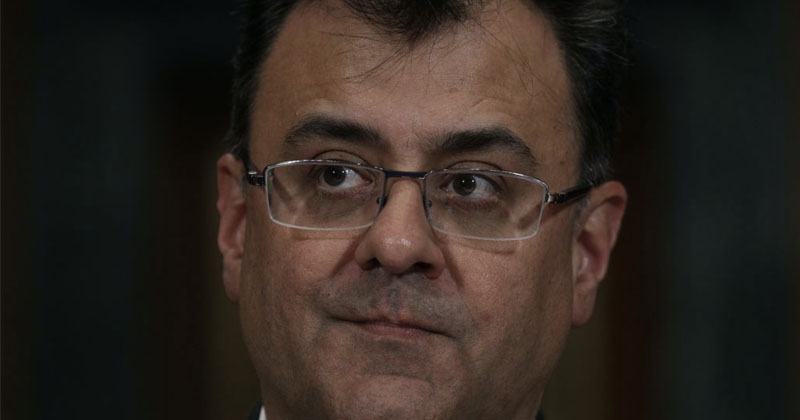 A Google executive claimed that Alex Jones and Infowars would soon be completely eradicated from its video platform YouTube.

Speaking during a Senate hearing on Tuesday over its censorship practices, Google’s VP for Government Affairs & Public Policy Karan Bhatia assured known Alex Jones-hater Sen. Richard Blumenthal (D-Conn.) that the company was doing everything in its power to remove all content related to the Infowars host after the senator invoked Sandy Hook.

“These lies were more than just false – they were malicious they were cruel, they incited harassment, physical threats, they forced his family literally every day to relive their loss,” Blumenthal said.

“This stuff is not speech it’s incitement, harassment, defamation. I respectfully suggest whatever your machines are, they’re not working, would you agree?”

Bhatia responded that Google was using not only its algorithms but also human assets to identify and remove any videos related to Alex Jones.

“We believe that hoax videos of the kind that you reference, and he had to experience, have no place on any of our platforms,” Bhatia said.

“And we have taken the challenge, the need to address that very seriously, including most recently amending our policies earlier this year – our community guidelines – to make clear that any such video that comes up will be taken down immediately.”

“Given the quantity of video that gets uploaded at any point in time, we have to depend on tools – on machines – to try and spot those videos,” Bhatia continued.

“We constantly are trying to improve them — and they are improving. Where we miss something and it gets caught by a viewer, we then take action against it.”

Blumenthal, dissatisfied with Google’s already draconian methods, didn’t think the tech giant was going far enough to completely censor all traces of Jones and Infowars from the internet.

“These kinds of policies, guidelines – forgive me – platitudes are no substitute for effective enforcement,” Blumenthal fumed. “You can’t simply unleash the monster and say it’s too big to control.”

Bhatia responded that despite Google’s desire to rid the world of Alex Jones content, the sheer number of videos uploaded by fans presents a significant challenge for the company’s AI detection systems to censor Infowars 100%.

“We don’t want these kinds of videos up,” Bhatia said. “It’s certainly not conducive to the kind of community we’re looking to build at YouTube. It is, given the sheer quantity that gets uploaded, it is a tough computer science challenge.”

Senator Blumenthal, attempts to cover for Google working with the Communist Chinese

Peter Thiel is attempting to warn the public as he calls for an investigation into Google for treason against the US.