WASHINGTON, D.C. – Google has decided to expand its war to censor conservatives and libertarians, including Infowars.com, by waging a campaign to demonetize videos and block Live Stream on Google Channels daring to feature the intelligence agent QAnon posting on the “8chan” bulletin boards.

Infowars.com has received credible reports from Google users that Google has also engaged in shadow-banning user channels that feature videos discussing QAnon, as well as unsubscribing users from the channel without informing the person creating the channel.

Various Google users have forwarded to Infowars.com credible information that Google continues to post ads on demonetized QAnon videos, allowing Google to derive revenue from the QAnon videos while depriving the creators of the QAnon videos of deriving any ad revenue.

This author can affirm that Google has begun demonetizing all Live Stream videos from discussions with the anonymous users participating in broadcasts like @CBTS_stream, as is evidenced by the following screen capture taken from Google user channel “jrlcorsi.” 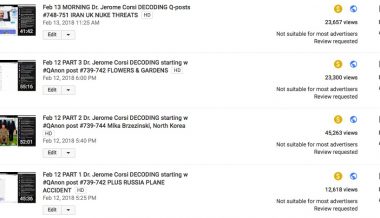 President Trump and FCC Chair Ajit Pai are fully aware of the efforts of the giant providers, including Google, Facebook, and Twitter to censor the views of conservatives and libertarians, despite their continued use of public broadband facilities to propagate their increasingly anti-Trump hard-left ideological orientation with impunity.

QAnon has been openly critical of Google’s censorship policies, suggesting it was no coincidence that Eric Schmidt resigned from Alphabet, Inc. almost simultaneously with President Trump signing on Dec. 21, 2017, an Executive Order which declared a state of national emergency, authorizing the Treasury Department to confiscate the U.S. assets of those engaged in serious human trafficking crimes and/or corruption.

Google has a long history of working with the CIA and NSA on research grants designed to advance the capabilities of the two secretive U.S. intelligence agencies to conduct electronic surveillance of U.S. citizens, including the tracking U.S. citizens’ communications in cyberspace via the Internet and via cell phone, including tracking email and text message communications.