The Google employee behind a ten-page viewpoint diversity manifesto that went viral online has been fired.

James Damore, whose manifesto criticizing the politically correct corporate culture at Google prompted outrage from left-wing employees and social justice warriors online, revealed that he had been fired in an email to Breitbart Tech on Monday evening.

In his email to Breitbart Tech, Damore claimed, “They just fired me for ‘perpetuating gender stereotypes.'”

Damore’s writing has revealed a divided Google, in which some employees agree with his outlook, but are afraid to speak out for fear of repercussions from social justice warriors in the company, such as being added to blacklists.

In a memo sent to employees, Google CEO Sundar Pichai reportedly claimed that Damore had violated their Code of Conduct.

I guess Google needs to keep up the left-wing’s ideological reign of terror.

As Damore wrote in his manifesto:

“[W]hen it comes to diversity and inclusion, Google’s left bias has created a politically correct monoculture that maintains its hold by shaming dissenters into silence. This silence removes any checks against encroaching extremist and authoritarian policies.”

As I noted earlier, Google had no response to his thoroughly detailed arguments other than to proclaim diversity is an unqualified good, “‘Nuff said.”

We are unequivocal in our belief that diversity and inclusion are critical to our success as a company, and we’ll continue to stand for that and be committed to it for the long haul. As Ari Balogh said in his internal G+ post, “Building an open, inclusive environment is core to who we are, and the right thing to do. ‘Nuff said.“

They’re all for inclusion and diversity, unless it involves including different viewpoints which counter their bulls**t narratives.

Here’s a ton of Google employees noting how they’re creating blacklists and organizing to get everyone who agrees with Damore fired: If you think what Damore wrote is so awful, why not just provide some actual evidence showing what he said was wrong? Oh, you don’t have any? 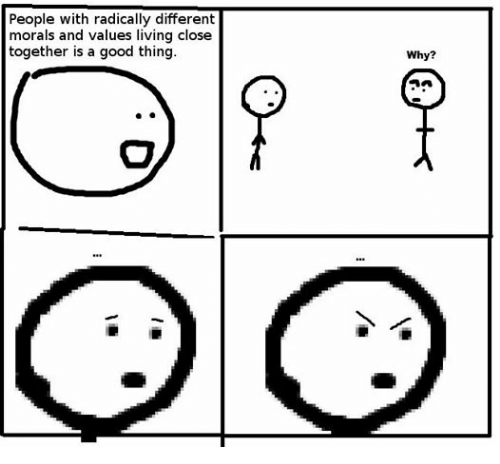 While Damore wrote his manifesto in as nice a way as possible, the fact of the matter is study after study has shown “diversity” has negative effects in the workplace and in society.

As Jared Taylor noted in a recent debate at Kentucky State University:

Have any of you heard of Robert Putnam of Harvard? He studied 41 different communities in the US that ranged from very homogeneous rural South Dakota to super-mixed-up Los Angeles. And what he found was that the more diversity there is, the less people trust each other. Well, Robert Putnam is a typical confused white man, and he just couldn’t believe what he found. He analyzed his data every possible way to find some reason other than diversity to explain why people in Los Angeles don’t trust each other. He couldn’t find one.

This was terrible for him, because he wanted to believe that diversity is a strength. So he just sat on his research for five years, and finally published it only because some of his findings leaked out.

So what did Robert Putnam found out? Diversity leads to:

* A lower expectation that people will cooperate to solve problems.

* A lower likelihood to bother to register to vote.

When you haven’t got friends and you don’t trust people you watch a lot of TV.

So, there it is, straight from Harvard: Diversity destroys trust.

Another study run by MIT and Tufts University summarized 15 different investigations of the impact of diversity on trust. The conclusion every time was: more diversity, less trust.

The great “science loving” left will try to burn you at the stake if you point these studies out. Damore told Reuters he is “exploring all possible legal remedies.”