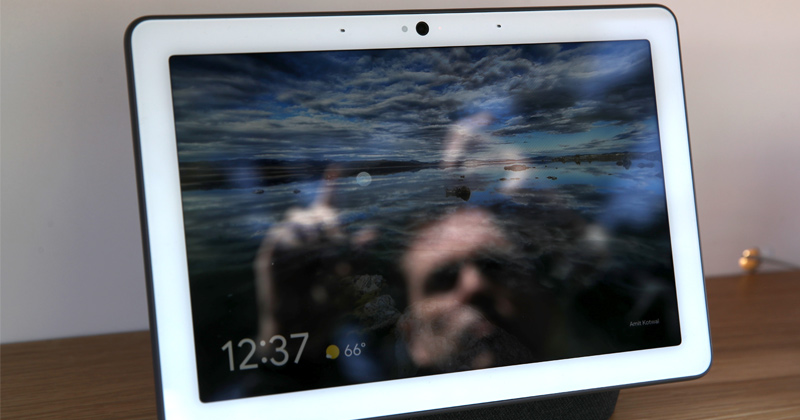 Google’s new “always-on” camera can now recognize your face INSIDE your home.

The new device, the Nest Hub Max, includes a wide-angle camera that can track different people’s faces and thus “tailor” content to each individual person, which of course leads to privacy concerns, not to mention comparisons to George Orwell.

For one thing, the camera has to stay on so it can zero in on people as they walk into its view.

If you opt in to the Hub Max’s “face match” features, Google asks each family member to briefly scan his or her mug. Then the Hub Max’s camera stays on, ambiently looking for those faces. When the Assistant finds one, it tailors the content on its screen. In the morning, it spotted me and proactively displayed a rundown of my day and commute – I never issued a command. You can also use it to leave reminders that pop up when the intended recipient passes by.

Let’s compare that to the following passage from the novel 1984:

The telescreen received and transmitted simultaneously. Any sound that Winston made, above the level of a very low whisper, would be picked up by it, moreover, so long as he remained within the field of vision which the metal plaque commanded, he could be seen as well as heard. There was of course no way of knowing whether you were being watched at any given moment. How often, or on what system, the Thought Police plugged in on any individual wire was guesswork. It was even conceivable that they watched everybody all the time. But at any rate they could plug in your wire whenever they wanted to. You had to live — did live, from habit that became instinct — in the assumption that every sound you made was overheard, and, except in darkness, every movement scrutinized.

And while the Washington Post pointed out the supposed steps Google is taking to protect privacy, the article’s author still said the “concerns only multiply from here:”

Today the face features are only accessible by Google, but what happens when it begins letting other apps and services access your face? Or when the tech also detects emotion in a face?

Ultimately, the Hub Max suffers from the same affliction as many new Google products: It’s frighteningly advanced technology that hasn’t identified the problem in our lives that needs solving. None of the camera functions the Hub Max offers today make it worth bringing surveillance inside my house.

Also keep in mind the proposal brought to the Trump administration that would allow Big Tech to monitor private conversations and user behavior that could then be used by the government to determine whether or not an individual can own a gun.

Watch Fire Power with Will Johnson weeknights from 7-9PM Central Only @ BANNED.video