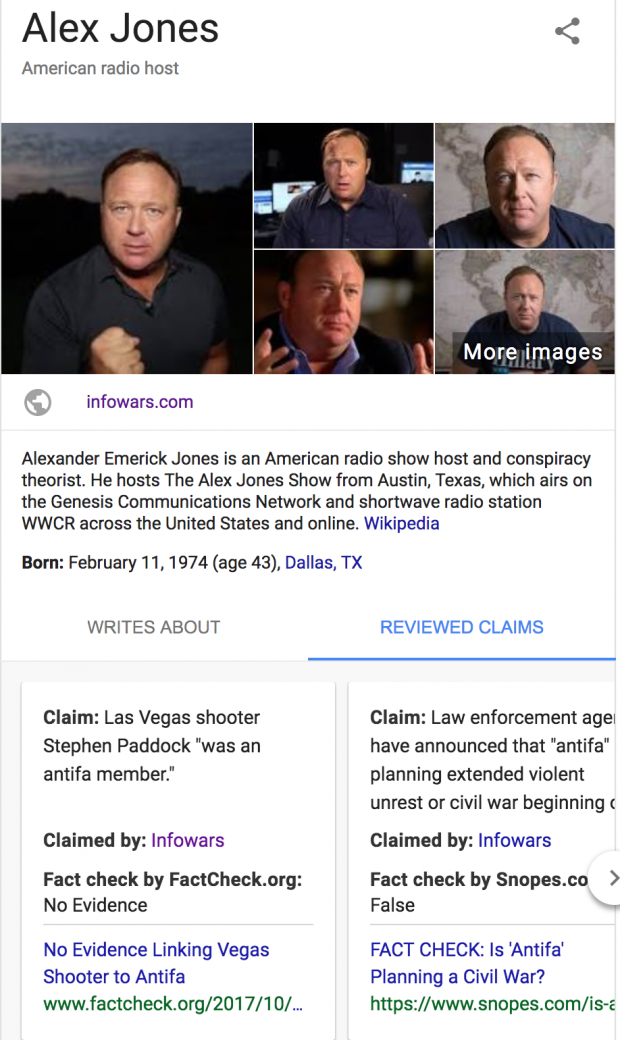 Google is now “reviewing the claims” of Infowars news articles by including links to left-leaning “fact checking” sites when people search for Alex Jones or Infowars.

Google’s biography box for Alex Jones, which is shown with related search results, now has a “Reviewed Claims” tab which displays an Infowars headline and an associated article from Politifact and/or Snopes.com that disputes the news.

The problem is that these “fact checking” sites are not as unbiased as they claim and are typically aligned with establishment interests, particularly those of Silicon Valley which wanted Hillary Clinton in the White House.

“Most ‘fact checkers’ are merely liberal journalists looking to prove their preconceived narrative,” wrote the Washington Times’ Kelly Riddell. “They cherry-pick the statements to ‘fact-check’ and then decide which data to back it up with.”

“Statistics can be manipulated — for every study coming out of the Brookings Institute, the Heritage Foundation can have a counter argument, depending on the methodology and surveys used. Moreover, much of what they decide to ‘fact-check’ is subjective at best. Nothing that can be pinned down with undisputed data.”

In short, “fact checking” is opinion journalism pretending to be some sort of heightened objectivity, as the Wall Street Journal’s James Taranto so eloquently stated.

The public largely agrees; most voters didn’t trust the media “fact checking” the news cycle during the presidential campaign, according to a survey.

“Most voters believe news organizations play favorites when it comes to fact-checking candidates’ statements, but this skepticism is much stronger among voters who support Donald Trump than those who back his rival Hillary Clinton,” the study stated. “A new Rasmussen Reports national telephone and online survey finds that just 29% of all Likely U.S. Voters trust media fact-checking of candidates’ comments.”

“Sixty-two percent (62%) believe instead that news organizations skew the facts to help candidates they support.”

Snopes in particular, which was founded by then-husband-and-wife David and Barbara Mikkelson, was recently entangled in controversy when David was accused of embezzling almost $100,000 from the site to pay for prostitutes in divorce documents filed by Barbara.

“The two also dispute what are basic facts of their [divorce] case – despite Snopes.com saying its ‘ownership’ is committed to ‘accuracy and impartiality,'” the Daily Mail reported, rather ironically.

Google’s latest disinformation campaign is a digital “Night of the Long Knives” targeting those who routinely counter establishment talking points, and it was likely conceived in the aftermath of Clinton losing the 2016 presidential election.

But the elites have already lost; we’ve already passed the Rubicon in which people would rather think for themselves by taking bits and pieces of the news cycle – removing establishment disinformation in the process – to form their own analysis rather than simply being spoonfed their “opinions” from “fact checking” sites.