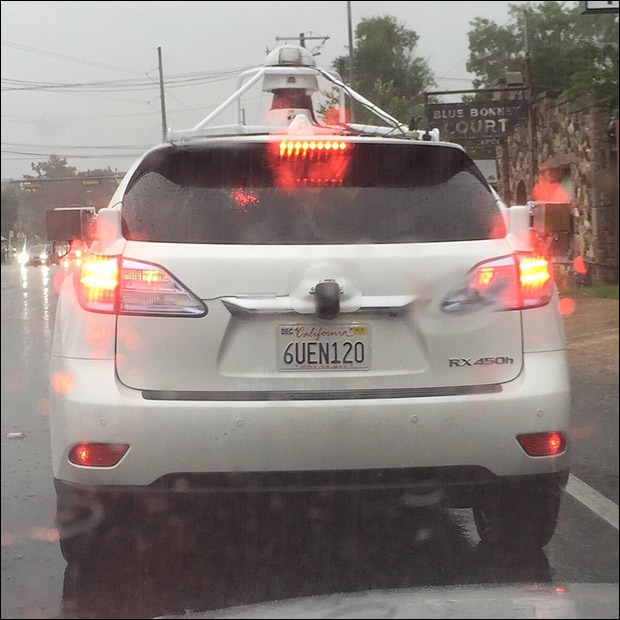 Update (July 7, 10:39am): On Tuesday morning, less than two weeks following the publication of this article, Google announced it has chosen Austin, Texas “as a new testing location for our project, and one of our Lexus SUVs is there now, with safety drivers aboard, driving a few square miles north and northeast of downtown Austin.”

Update (June 26, 3:51pm): Samantha Alexander, the Public Information and Marketing Manager for the Austin Transportation Department, has reached out to us saying they are “waiting to get information back.”

A media contact at the Texas Department of Transportation has also stated they’re “still working on” it.

A Google self-driving car has been spotted in Austin, Texas, prompting speculation as to whether the technology has been secretly approved for public testing by city or state lawmakers.

A gyroscope spins atop the roof, as the man filming approaches the car, which has “Google” clearly emblazoned on both driver and passenger sides.

“I saw it on 45th,” a Redditor commented. “Had no idea what it was and neither of the two girls in it were helpful.”

Multiple others in the comments said they’d also seen the vehicle cruising around Austin.

The numerous sightings confirm the company is testing its self-driving cars on Texas public roads, absent of any laws prohibiting them from doing so.

In 2013, Google showcased the self-driving vehicle to Texas lawmakers by driving it from the company’s headquarters in Mountain View, California, to Austin, where the city’s mayor, police chief and various state administrators took turns taking autopilot joyrides.

A spokesperson for the Austin transportation department at the time said the law is still “fuzzy” on self-driving cars, but that she didn’t think “there’s any issues… or a specific ordinance against” operating them.

As of yet, four states – California, Nevada, Michigan and Florida – have passed laws legalizing autonomous vehicles on public roads. Those states, along with Virginia and Washington DC, have given Google the OK to test self-driving vehicles on roadways.

To date, Texas lawmakers have not passed legislation addressing or permitting the operation of autonomous vehicles.

Google’s Chris Urmson, the director of the self-driving car program, revealed earlier this year the cars have been involved in 11 accidents since the company started testing them in 2009, but that number could be higher.

The AP reports California just last week reversed a policy that kept self-driving vehicle crashes from having to be disclosed to the public.

The problems with the technology are worsened by the notion that self-aware autos may one day decide to kill you, if it means saving others’ lives.

“What if, for instance, your driverless car decides that your life is expendable in order to save a school bus full of children?” asks Breitbart’s Warner Todd Huston.

“Are you comfortable with a soulless computer making a life or death decision when it is your life on the line? Should the computer in your driverless car be able to use a ‘utilitarian’ philosophy to save the lives of others even if yours is sacrificed to do so?”

At the time of publishing, Google did not respond to requests for comment by phone or email regarding the reported sightings.