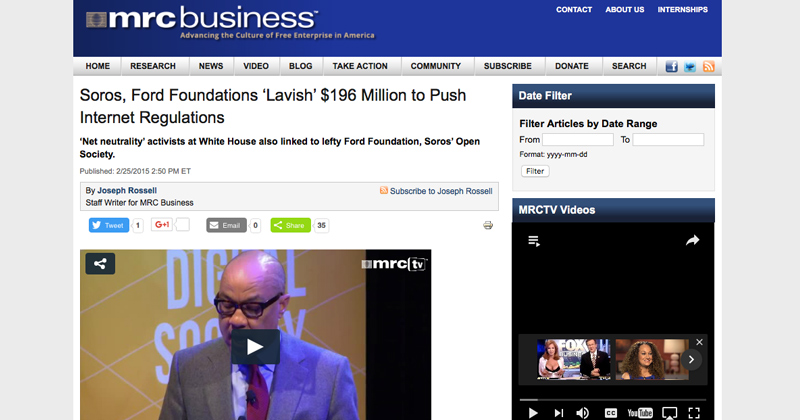 WASHINGTON, D.C. – Funded by Google and George Soros, a group of leftist foundations have organized a “Fake News” war against the GOP, claiming that Republicans have voted to overturn Obama administration FCC rules designed to “protect Internet privacy.”

Three entities – Google, Soros’ Open Society Institute and the Ford Foundation – have contributed more than $72 million since roughly 2006 to non-profits that have been most active in pushing net neutrality, as well as privacy rules on the broadband industry to give the government a firm foothold in regulating the Internet.

The grant amounts were gathered from public resources including non-profit 990 tax forms, the non-profits’ web pages and other public sources.

Google’s interest in privacy rules for ISPs and broadband providers should be self-evident: The draconian privacy rules only apply to Google’s competitors in the broadband industry, leaving Google – arguably the world’s worst violator of online privacy – virtually unscathed.

Google, one of the most powerful companies in the world, and one that routinely preaches an ethos of openness and transparency, is surprisingly non-transparent when it comes to its own contributions to organizations that support a government takeover of the Internet.

While the company has a “transparency” web page, it is largely a fig leaf – a token list of the non-profits it supports currently and in the past – offering no details of the often-staggering amounts of funding it provides to the groups that support its public policy goals.

The truth is Google and Soros are pushing a complete distortion of the issue in the Fake News war launched against the GOP on issues including net neutrality and Internet privacy.

The truth is the left wants to control the Internet to impose censorship of conservatives, while Google has made millions of dollars quietly selling to third-parties the massive amount of information Google has harvested by monitoring web-browsing and collecting GSP location data, typically without the knowledge or consent of Google users.

What truly is involved with the Internet privacy issue traces back to a last-hour effort by the Obama administration, getting the Democratic Party-controlled Federal Communications Commission (FCC) to rule on Oct. 27, 2016, that Internet providers like Verizon, Comcast Corp and AT&T had to obtain prior authorization from customers to market information mined from a customer’s web-browsing activity before selling that data to third parties.

As Breitbart News revealed, the truth about the party-line House vote on Thursday to overturn this rule was that the Obama administration last October was attempting to move regulation of privacy issues into the domain of the FCC, instead of the Federal Trade Commission, where privacy regulation has traditionally resided.

“The FCC already has the ability to oversee privacy with broadband providers,” Rep. Marsha Blackburn, R-TN, explained to Breitbart.com. “That is done primarily through Section 222 of the Communications Act, and additional authority is granted through Sections 201 and 202. Now, what they did was to go outside of their bounds and expand that.”

“They did a swipe at the jurisdiction of the Federal Trade Commission, the FTC.”

“They have traditionally been our nation’s primary privacy regulator, and they have done a very good job of it,” Blackburn continued.

What the GOP did by overturning the FCC privacy rule was to reverse Obama administration overreach, preventing the Obama administration from expanding the authority of the FCC to regulate the Internet such that censorship rules could be read into privacy regulations should the Democrats resume control of the White House in the future.

The GOP did not want the FCC, the traditional regulation of communications technology, including radio and television, to reach into established FTC authority to regulate privacy issues.

The GOP recalled the FCC Internet privacy rules and gave authority back to the FTC.

“The FTC has the ability to protect consumers, and that is what they do. They are the primary regulator,” Blackburn told Breitbart. “But let’s say an ISP begins to sell that data, then there would be complaints filed, and the FCC would go after that broadband provider under the regulations that are on the books.”