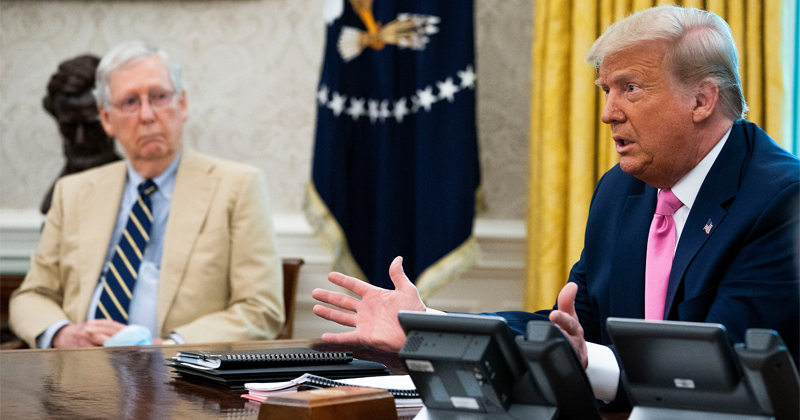 A new pandemic relief bill being drafted by Senate Republicans and the White House would include a payroll tax ‘deferral’, as well as another round of direct payments to individual Americans – potentially at the same $1,200 level as the previous stimulus in the Cares Act.

According to the Washington Post, the payroll tax deferral is in lieu of an outright cut – which keeps down the technical cost of the overall bill, but could also be waived entirely by lawmakers at a later date.

“It’s been proven to be successful and it’s a big saving for the people. It’s a tremendous saving and an incentive for companies to hire their workers back and to keep their workers,” Trump said of the payroll tax relief, following a Monday meeting in the Oval Office which included Senate Majority leader Mitch McConnell (R-KY), House Minority Leader Kevin McCarthy (R-CA) and Treasury Secretary Steven Mnuchin.

“The payroll tax to me is very important,” Trump added of the 7.65% tax paid by employers and employees which funds Social Security and Medicare.

Mnuchin, meanwhile, “confirmed Republicans plan to reduce the size of a $600-per-week enhanced unemployment benefit approved in March, which will begin running out for millions of Americans later this week,” according to the Post, which notes that Republicans have argued that many workers are making more thanks to the enhanced unemployment benefits than they were while employed.

On Tuesday, White House Chief of Staff Mark Meadows will be meeting with the full Senate GOP conference at their weekly policy lunch in order to review the proposal.

According to McConnell, the legislation will contain liability protection for businesses, healthcare providers and others per the Post.

“We don’t need an epidemic of lawsuits.”

The GOP legislation will slash money for cities and states which Democrats have requested.

A Twitter Administration control panel was hacked into revealing alleged leaked pictures spotlighting the buttons ‘Trends Blacklist’ and ‘Search Blacklist’, indicating Twitter DOES have the ability to shadowban its users. Exposing that Twitter CEO Jack Dorsey clearly lied to Congress.