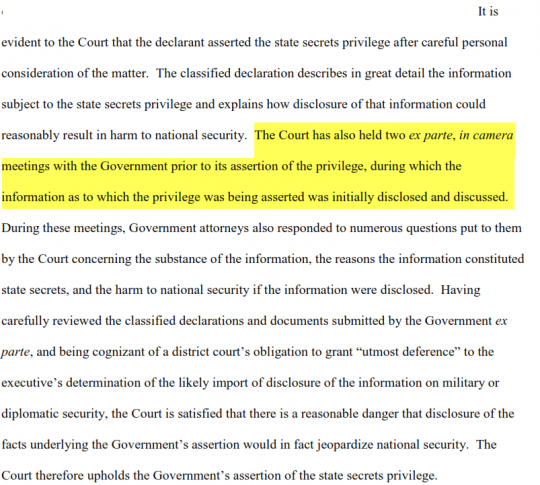 Publicity is justly commended as a remedy for social and industrial diseases. Sunlight is said to be the best of disinfectants; electric light the most efficient policeman.

But there’s no longer much sunlight to disinfect the corruption of the government or the powers-that-be.

More and more commonly, the government prosecutes cases based upon “secret evidence” that they don’t show to the defendant … or sometimes even the judge hearing the case.

As just one example, government is “laundering” information gained through mass surveillance through other agencies, with an agreement that the agencies will “recreate” the evidence in a “parallel construction” … so the original source of the evidence is kept secret from the defendant, defense attorneys and the judge.   A former top NSA official says that this is the opposite of following the Fourth Amendment, but is a “totalitarian process” which shows that we’re in a “police state”.

The government uses “secret evidence” to spy on Americans, prosecute leaking or terrorism charges (even against U.S. soldiers) and even assassinate people. And see this and this.

Secret witnesses are being used in some cases. And sometimes lawyers are being prevented from reading their own briefs.

Indeed, even the laws themselves are now starting to be kept secret. And it’s about to get a lot worse.

American citizens are also being detained in Guantanamo-like conditions in Chicago … including being held in secret, with the government refusing to tell a suspect’s lawyer whether his client is being held.   And see this, this and this.

The Department of Defense has also made it a secret – even from Congress – as to the identity of the main enemies of the United States.

Today, Glenn Greenwald adds yet another twist to the trend towards secrecy:

A truly stunning debasement of the U.S. justice system just occurred through the joint efforts of the Obama Justice Department and a meek and frightened Obama-appointed federal judge, Edgardo Ramos, all in order to protect an extremist neocon front group from scrutiny and accountability. The details are crucial for understanding the magnitude of the abuse here.
At the center of it is an anti-Iranian group calling itself “United Against Nuclear Iran” (UANI), which is very likely a front for some combination of the Israeli and U.S. intelligence services. When launched, NBC described its mission as waging “economic and psychological warfare” against Iran. The group was founded and is run and guided by a roster of U.S., Israeli and British neocon extremists such as Joe Lieberman, former Bush Homeland Security adviser (and current CNN “analyst”) Fran Townsend, former CIA Director James Woolsey, and former Mossad Director Meir Dagan. One of its key advisers is Olli Heinonen, who just co-authored a Washington Post Op-Ed with former Bush CIA/NSA Director Michael Hayden arguing that Washington is being too soft on Tehran.

This group of neocon extremists was literally just immunized by a federal court from the rule of law. That was based on the claim — advocated by the Obama DOJ and accepted by Judge Ramos — that subjecting them to litigation for their actions would risk disclosure of vital “state secrets.” The court’s ruling was based on assertions made through completely secret proceedings between the court and the U.S. government, with everyone else — including the lawyers for the parties — kept in the dark.

In May 2013, UANI launched a “name and shame” campaign designed to publicly identify — and malign — any individuals or entities enabling trade with Iran. One of the accused was the shipping company of Greek billionaire Victor Restis, who vehemently denies the accusation. He hired an American law firm and sued UANI for defamation in a New York federal court, claiming the “name and shame” campaign destroyed his reputation.

Up until that point, there was nothing unusual about any of this: just a garden-variety defamation case brought in court by someone who claims that public statements made about him are damaging and false. That happens every day. But then something quite extraordinary happened: In September of last year, the U.S. government, which was not a party, formally intervened in the lawsuit, and demanded that the court refuse to hear Restis’s claims and instead dismiss the lawsuit against UANI before it could even start, on the ground that allowing the case to proceed would damage national security.

When the DOJ intervened in this case and asserted the “state secrets privilege,” it confounded almost everyone. The New York Times’s Matt Apuzzo noted at the time that “the group is not affiliated with the government, and lists no government contracts on its tax forms. The government has cited no precedent for using the so­-called state­ secrets privilege to quash a private lawsuit that does not focus on government activity.” He quoted the ACLU’s Ben Wizner as saying: “I have never seen anything like this.” Reuters’s Allison Frankel labeled the DOJ’s involvement a “mystery” and said “the government’s brief is maddeningly opaque about its interest in a private libel case.”

Usually, when the U.S. government asserts the “state secrets privilege,” it is because they are a party to the lawsuit, being sued for their own allegedly illegal acts (such as torture or warrantless surveillance), and they claim that national security would be harmed if they are forced to defend themselves. In rare cases, they do intervene and assert the privilege in lawsuits between private parties, but only where the subject of the litigation is a government program and one of the parties is a government contractor involved in that program — such as when torture victims sued a Boeing subsidiary, Jeppesen, for its role in providing airplanes for the rendition program and the Obama DOJ insisted (successfully) that the case not go forward, and the victim of U.S. torture was thus told that he could not even have a day in court.

But in this case, there is no apparent U.S. government conduct at issue in the lawsuit. At least based on what they claim about themselves, UANI is just “a not-for-profit, non-partisan, advocacy group” that seeks to “educate” the public about the dangers of Iran’s nuclear program. Why would such a group like this even possess “state secrets”? It would be illegal to give them such material. Or could it be that the CIA or some other U.S. government agency has created and controls the group, which would be a form of government-disseminated propaganda, which happens to be illegal?

What else could explain the basis for the U.S. government’s argument that allowing UANI to be sued would risk the disclosure of vital “state secrets” besides a desire to cover up something quite untoward if not illegal? What “state secrets” could possibly be disclosed by suing a nice, little “not-for-profit, non-partisan, advocacy group”?

We don’t know the answers to those questions, nor do the lawyers for the plaintiffs whose lawsuit the DOJ wants dismissed. That’s because, beyond the bizarre DOJ intervention itself, the extreme secrecy that shaped the judicial proceedings is hard to overstate. Usually, when the U.S. government asserts the “state secrets privilege,” at least some information is made public about what they are claiming: which official or department is invoking the privilege, the general nature of the secrets allegedly at risk, the reasons why allowing the claims to be adjudicated would risk disclosure, etc. Some redacted version of the affidavit from the government official making the secrecy claim is made part of the case.

Here, virtually everything has been hidden, even from the plaintiffs’ lawyers. Not only did the U.S. government provide no clue as to what the supposedly endangered “state secrets” are, but they concealed even the identity of the agency making the claim: was it the CIA, the Treasury Department, the State Department, some combination? Nothing is known about any of this, not even who is making the secrecy claim.

Instead, the DOJ’s arguments about why “secrecy” compels dismissal of the entire lawsuit were made in a brief that only Judge Ramos (and not even the parties) gets to read, but even more amazingly, were elaborated on in secret meetings by DOJ lawyers in the judge’s chambers with nobody else present. Were recordings or transcripts of these meetings made? Is there any record of what the U.S. government whispered in the ear of the judge to scare him into believing that National Security Would Be Harmed™ if he allowed the case to proceed? Nobody knows. The whole process is veiled in total secrecy, labeled a “judicial proceeding” but containing none of the transparency, safeguards or adversarial process that characterizes minimally fair courts.

This sham worked. This week, Judge Ramos issued his ruling dismissing the entire lawsuit (see below). As a result of the DOJ’s protection, UANI cannot be sued. Among other things, it means this group of neocon extremists now has a license to defame anyone they want. They can destroy your reputation with false accusations in a highly public campaign, and when you sue them for it, the DOJ will come in and whisper in the judge’s ear that national security will be damaged if — like everyone else in the world — UANI must answer in a court of law for their conduct. And subservient judicial officials like Judge Ramos will obey the U.S. government’s dictates and dismiss your lawsuit before it begins, without your having any idea why that even happened.

Worse, in his written ruling, the judge expressly acknowledges that dismissal of the entire lawsuit at the start on secrecy grounds is what he calls a “harsh sanction,” and also acknowledges that “it is particularly so in this case because Plaintiffs not only do not get their day in court, but cannot be told why” (emphasis added). But he does it anyway, in a perfunctory 18-page opinion that does little other than re-state some basic legal principles, and then just concludes that everything the government whispered in his ear should be accepted. Just read for yourself what Judge Ramos said in defending his dismissal to see how wildly disparate it is from everything we’re propagandized to believe about the U.S. justice system:

What kind of “justice system” allows a neocon “advocacy” group to be immunized from the law, because the U.S. government waltzed into court, met privately with the judge, and whispered in secret that he had better dismiss all claims against that group lest he harm national security? To describe what happened here is to illustrate what a perverse travesty it is. Restis’s lawyer, Abbe Lowell, said in a statement this week:

We are disappointed that some secret relationship between UANI and the government allows UANI to hide from disclosing that association or to defend what has now been proven to be its false and defamatory allegations directed at Mr. Restis and his company. We are mystified that the U.S. government has such a stake in this case that it would take such extraordinary steps to prevent full disclosure of the secret interest it has with UANI or others. And, we are concerned that, in our court system, such a result could occur on the basis of sealed, one-sided filings and meetings in which we were not allowed to participate.

Indeed, the government is going to incredible lengths to keep secrets, including:

Sadly, the sunlight is fading … and America is falling into darkness.

Postscript: On “Freedom of Information Day” – in the middle of “Sunshine Week” – the Obama administration announced that White House emails are not subject to freedom of information requests, and urged that a whole new category of information be kept secret from the American people.

Orwell would be proud.