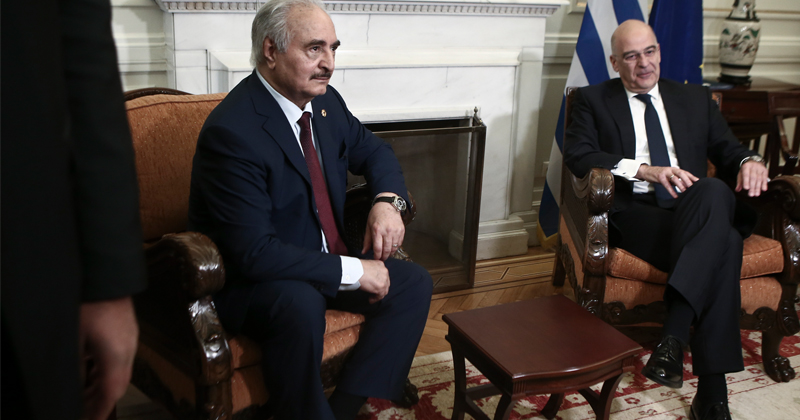 Greece’s proposal to send forces to observe a fragile truce in Libya could lead to an indirect conflict between Ankara and Athens, analysts told RT, warning that the NATO allies could soon lock horns over the issue.

Nikos Dendias, the Greek foreign minister, announced that his government was willing to deploy forces to the war-torn North African nation in order to monitor the ceasefire between the Libyan National Army (LNA) and the Tripoli-based Government of National Accord (GNA).

The offer was put forward after Dendias met with LNA leader General Khalifa Haftar, who has been fighting forces loyal to Tripoli.

Ankara has thrown its full support behind the GNA, sending troops to back the government and warning Haftar against further military action.

The development, coming just days ahead of a summit in Berlin to discuss the situation in Libya, could have wider geopolitical implications, former Greek diplomat and ambassador Leonidas Chrysanthopoulos argued.

Greece could find itself in an “indirect” conflict with Turkey if Ankara pursues drilling off the coast of Crete, Chrysanthopoulos told RT, noting that newly inked economic agreements between Turkey and the GNA affect Athens’ own economic zone. He predicted that, while Greece’s presence in Libya might escalate tensions, a potential standoff between Athens and Ankara wouldn’t necessarily happen in Libyan territory.

Alex Jones breaks down the forces behind the U.S. Embassy attack in Baghdad, Iraq, and explains how President Trump must act to prevent the perception of further chaos and instability.

It’s only trying to “attract more attention from other European countries” to the conflict and persuade major EU players, like Germany and France, “to make some decisive moves in order to balance the warring sides in Libya,” he said.

Athens won’t send its troops to Libya because it is an EU member, and the bloc isn’t interested in any escalation. The other reason is that Greece does not have “enough military capabilities” to carry out such an operation. Even if it is provided, “Greek support won’t be enough to give Haftar a decisive advantage over GNA’s Prime Minister, Fayez al-Sarraj,” Khlebnikov added.

Journalist Abdel Bari Atwan thinks that Greek troops in Libya could be the “first step” towards a proxy war between Ankara and Athens, as Turkey has already sent troops to support Tripoli. He noted that the conflict in North Africa could potentially escalate and “divide” NATO, as well as end up dragging “superpowers” into the fray.

Turkey and Greece are already divided over a decades-old territorial dispute in Cyprus, and the two NATO allies have had close-call encounters, both at sea and in the air.

Watch and share this groundbreaking report from Mike Adams.