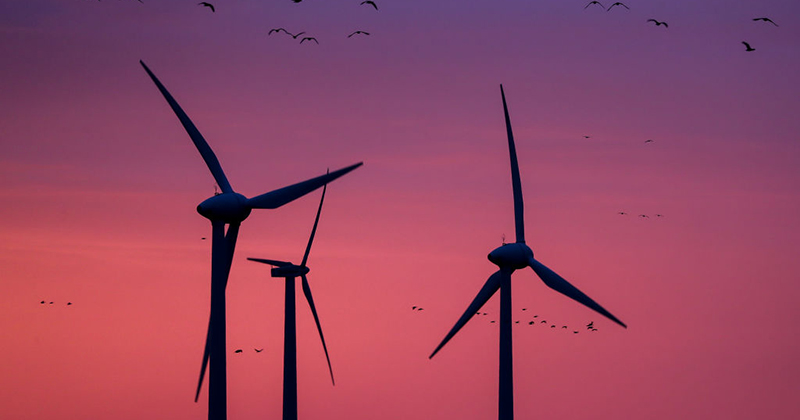 A wind turbine’s blades can be longer than a Boeing 747 wing. But where do they end up when they aren't in use? Landfills in Iowa, Wyoming and South Dakota https://t.co/tPSRSQINiu

From Bloomberg, “Wind Turbine Blades Can’t Be Recycled, So They’re Piling Up in Landfills”:

A wind turbine’s blades can be longer than a Boeing 747 wing, so at the end of their lifespan they can’t just be hauled away. First, you need to saw through the lissome fiberglass using a diamond-encrusted industrial saw to create three pieces small enough to be strapped to a tractor-trailer.

The municipal landfill in Casper, Wyoming, is the final resting place of 870 blades whose days making renewable energy have come to end. […]

Tens of thousands of aging blades are coming down from steel towers around the world and most have nowhere to go but landfills. In the U.S. alone, about 8,000 will be removed in each of the next four years. Europe, which has been dealing with the problem longer, has about 3,800 coming down annually through at least 2022, according to BloombergNEF. It’s going to get worse: Most were built more than a decade ago, when installations were less than a fifth of what they are now.

The Big Tech Giants want you to stop spreading unfounded conspiracy theories rejected by the establishment media. That means the first casualty of the coronavirus is the truth.

Built to withstand hurricane-force winds, the blades can’t easily be crushed, recycled or repurposed. That’s created an urgent search for alternatives in places that lack wide-open prairies. In the U.S., they go to the handful of landfills that accept them, in Lake Mills, Iowa; Sioux Falls, South Dakota; and Casper, where they will be interred in stacks that reach 30 feet under.

“The wind turbine blade will be there, ultimately, forever,” said Bob Cappadona, chief operating officer for the North American unit of Paris-based Veolia Environnement SA, which is searching for better ways to deal with the massive waste. “Most landfills are considered a dry tomb.”

They’re highly inefficient (only in the past few years was it realized there’s such a thing as “wind shortages” and “wind droughts”), deadly to birds, disturbing to wildlife, loud as hell and completely destroy what would otherwise be picturesque scenes of nature.

Nonetheless, city-dwelling “liberals” glance at them out of the window of their Teslas and think they’re beautiful.