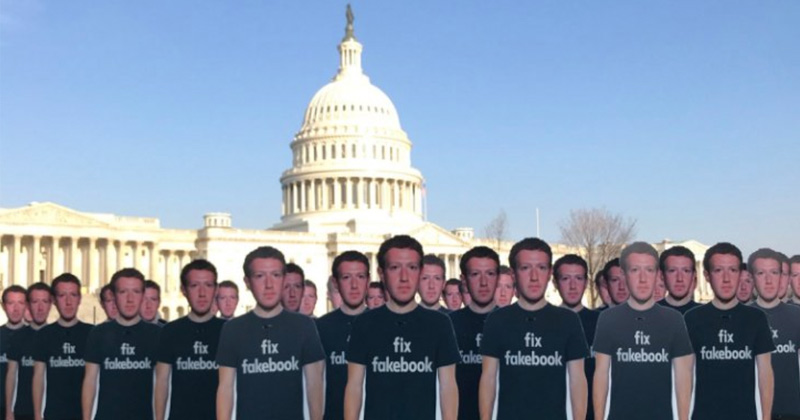 A political advocacy group protested Facebook in the nation’s capitol by rolling out a “troll army” of Zuckerberg cutouts.

#NOW in front of the #Capitol: A fake #Zuckerberg army marches on the Capitol Lawn. Come by, if you're in the area. We're here for a bit longer. Media advisory here: https://t.co/hbraKSOgO5 #Facebook #FixFacebook pic.twitter.com/JzcjP14GOX

According to a press release, Avaaz’s campaign aims to bring attention to the use of fake accounts and the spread of “disinformation” on the platform.

“The group is calling on the CEO to ban all bots, alert the public any and every time users see fake or disinformation, fund fact checkers around the world, and submit to an independent audit to review the scale and scope of fake news,” the press release said.

The group’s stunt comes as Zuckerberg prepares to deliver Congressional testimony Tuesday in the wake of numerous scandals.

The social media company was called to testify after news broke that data firm Cambridge Analytica obtained data on as many as 87 million Facebook users.

Facebook also announced the suspension of another data broker this week that reportedly misled users about the information it collected.

The issues have caused a public backlash against both Zuckerberg and his company’s business model.

Apple co-founder Steve Wozniak joined other high-profile users such as Tesla CEO Elon Musk this week in removing their profiles from Facebook’s website.