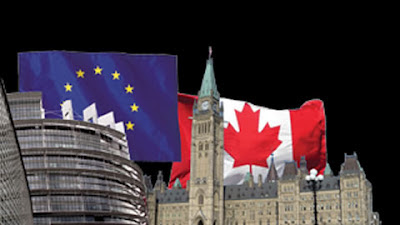 With the final rounds of negotiations sessions planned for September and October, Canada and the EU are closing in on a free trade deal that would go far beyond the reach of NAFTA. Meanwhile, there is growing opposition to the agreement as the whole process has lacked openness, transparency and any public consultations. In Canada, there are concerns over the threat it poses to local democracy. This includes fears of deregulation and privatization, as well the expansion of corporate investor rights. There are also warnings that the deal could be used as a backdoor means to implement ACTA which was rejected by the European Parliament in July.

As the Canada-European Union (EU) Comprehensive Economic and Trade Agreement (CETA) talks near their end, the Council of Canadians continue to voice their opposition to the deal. While I don’t agree with their position on some different issues, they have been championing the fight against CETA. In an effort to counter misleading statements made by the Conservative government regarding the trade pact, they have released the report, the CETA Deception. Trade campaigner, Stuart Trew explained how this is an effort to, “challenge the government’s reassurances that its EU trade deal will not affect public health or environmental regulations, will not allow foreign corporations to challenge public policy, will not undermine public services or municipal democracy, will not increase drug prices or hurt Canada’s supports for arts and culture. In each case, the government’s position is either misleading or demonstrably false.” As a result of the threat CETA poses to local sovereignty, a growing number of Canadian municipalities have passed resolutions seeking more information and a greater say in negotiations with some also requesting to be excluded from the agreement.

In her recent visit to Canada, German Chancellor Angela Merkel pledged support for the Canada-EU free-trade pact and promised to see to it that talks come to a speedy conclusion. The endorsement was seen as a much needed boost for Prime Minister Stephen Harper who is eager to get a deal signed before the end of the year. The Conservative government maintains that deeper trade with the EU will create jobs, economic growth and long-term prosperity. They have also tried to convince the public that CETA has been one of the most transparent trade negotiations in Canadian history. In an article for iPolitics, Stuart Trew stressed that, “If CETA and agreements like it are supposed to be 21st century or ‘next-generation’ free trade deals, they should be negotiated in 21st century ways ― openly, transparently, and with broad public input. Failure to do so in the ACTA negotiations led to that agreement’s demise in the European Parliament. The same fate could easily await CETA on both sides of the Atlantic.”

Last month, after mounting public pressure, the European Parliament rejected the Anti-Counterfeiting Trade Agreement (ACTA). The vote was the result of, “unprecedented direct lobbying by thousands of EU citizens who called on it to reject ACTA, in street demonstrations, e-mails to MEPs and calls to their offices. Parliament also received a petition, signed by 2.8 million citizens worldwide.” The U.S., Canada, Australia, Japan and New Zealand, as well as other countries have also signed on to ACTA, but have yet to ratify the deal. ACTA poses a serious risk to internet freedom and privacy. It would also give an unfair advantage to patented medicines and limit access to affordable generic options. Academic researcher and law professor Michael Geist warned that, “In the coming weeks and months, we can expect new efforts to revive the agreement within Europe and to find alternative means to implement its provisions.” It now appears that EU negotiators are trying to use CETA to sneak in ACTA.

Just days after ACTA was defeated, Michael Geist reported that leaked documents show the, “EU plans to use the Canada-EU Trade Agreement (CETA), which is nearing its final stages of negotiation, as a backdoor mechanism to implement the ACTA provisions.” He noted that, “The European Commission strategy appears to be to use CETA as the new ACTA, burying its provisions in a broader Canadian trade agreement with the hope that the European Parliament accepts the same provisions it just rejected with the ACTA framework.” After initially refusing to comment on the leak, the European Commission issued the statement, CETA is not ACTA in which they claimed that, “The accusations are unfounded since they rely on outdated and incomplete information.” In a recent update, Geist reaffirmed that the, “concerns that CETA may replicate ACTA appear to be very real despite the denials from the European Commission.” This whole issue has caused an uproar across Europe and in Canada and has brought much needed attention to CETA.

In their article, A trade deal that sets a bad precedent, Stuart Trew and Blair Redlin emphasized other CETA dangers besides ACTA which may threaten European policy and interests. They pointed out that CETA will be the first EU-wide investor-rights treaty covering all member states. Trew and Redlin posed the question, “What difference would a new treaty with Canada make? It is important to keep in mind the deep integration of the North American economy. The same U.S. firms that have taken Canada before investor-state panels under the North American free-trade agreement (NAFTA) 17 times will be able to challenge EU policy through their Canadian investments.” As far as NAFTA rules go, any rights granted to EU corporations as part of CETA would also apply to North American companies. CETA is being used to bridge the NAFTA and EU trade models. Ultimately, what happens with CETA will affect how the U.S. and EU move forward with their own future free trade plans.

According to legal analysis by international trade and public interest lawyer, Steven Shrybman, CETA would expand NAFTA investor rights and protections. He acknowledged that, “With CETA, Canada is proposing to accord EU investors and services providers far more expansive rights than those accorded (to) their U.S. and Mexican counterparts. Canada would therefore be required to provide this ‘most-favoured’ treatment to its NAFTA partners, even though neither is making reciprocal commitments.” Shrybman also described how the trade deal will give European corporations new rights at the expense of provincial powers. He cautioned that, “CETA represents a dramatic expansion of the application of international rules to spheres of provincial and local governance.” He went on to say, “policy and regulatory options of provincial, territorial and municipal governments will be curtailed to a much greater extent than has been the case under these earlier free trade agreements.” Modeled in the same fashion as NAFTA’s Chapter 11, the investor-state dispute process in CETA would give EU corporations the right to challenge government policies that restrict their profits.

As negotiations enter their final stretch, it is imperative to get the word out on how CETA could further jeopardize our political and economic sovereignty. A NAFTA-style free trade agreement with Europe that gives corporations further powers to influence Canadian laws would be dangerous and destructive. Considering the deepening economic crisis in Europe and the real possibility that the Eurozone could break up, it is also the wrong time for Canada to be entering into this trade deal with the EU.

——————–
This article first appeared at Dana Gabriel’s Be Your Own Leader blog.

Dana Gabriel is an activist and independent researcher. He writes about trade, globalization, sovereignty, security, as well as other issues. Contact: [email protected] Visit his blog at Be Your Own Leader