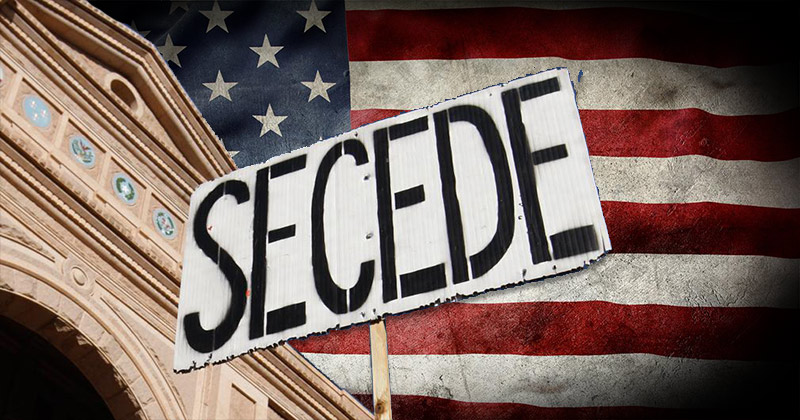 Patriotic citizens in Virginia, Oregon, California, Illinois and New York are sick of having their rights abused by Democrat politicians.

Secession movements in each of the above states are gaining traction as residents hope to protect the Second Amendment, religious and economic freedoms and much more.

However, the counties aren’t attempting to leave the United States and are instead proposing either becoming entirely new states or joining with more conservative neighboring states.

A common theme among the dissenting counties in each state is major cities controlling what happens in rural communities, a problem also seen on a macro scale with New York, Los Angeles and other megacities seeking to influence what happens in “flyover” country.

Mike McCarter, president of Move Oregon’s Border for a Greater Idaho, explained, “Oregon is controlled by the northwest portion of the state, Portland to Eugene. That’s urban land, and their decisions are not really representing rural Oregon. They have their agenda and they’re moving forward with it, and they’re not listening to us.”

A pro-secession Virginia activist named Rick Boyer said, “To be honest, if this works — you’ve got a lot of red areas in this country that are totally dominated by a blue metropolis. If it works in Virginia, there’s no reason it can’t reshape the political map.”

Illinois state Rep. Brad Halbrook wants Chicago to become its own state for similar reasons, proclaiming, “Downstate voices are simply not being heard because we’ve been forced into this democracy that’s concentrated power into a small geographical area of the state.”

Politicians from more conservative states have welcomed the idea of red counties trapped in blue states joining their territories.

West Virginia Gov. Jim Justice also understands the frustrations of his neighbors and a recently passed resolution in the state’s House invites Virginia counties to cross over.

Republican state Rep. Gary Howell, the sponsor of the resolution to invite Virginia counties to join West Virginia, said, “The big difference is this is the first time another state has made the offer to take them. That’s never happened.”

“There’s been very little pushback,” he added. “The resolution I like to say has tri-partisan support because not only does it have Republicans and Democrats, it also has our lone independent on it.”

The increasingly divisive political atmosphere in America is forcing citizens to take peaceful action as a last-ditch effort to protect their freedoms before peaceful options no longer exist.