The Guantánamo war crimes tribunals are “transparently unfair” and will be the only court in US history where the rights of the US Constitution do not apply, the lawyer charged with defending the alleged Al Qa’eda mastermind behind the USS Cole bombing claimed last night. 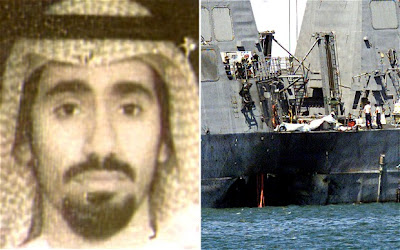 In a furious broadside against the military tribunal that will also be used to conduct the September 11 trials, the lead defence lawyer for Abd al Rahim al Nashiri said the US government was seeking to kill their client ‘on the cheap’.

Mr Kammen was speaking at a press conference after the conclusion of two days of pretrial hearing for Al Nashiri, a 47-year-old Saudi man accused of orchestrating the USS Cole bombing in 2000 that killed 17 US sailors.

During the hearings, the defence complained they were locked in a grossly unequal contest with the US Government, being left short of resources for translators and blindsided by rules governing the disclosure of classified documents.

Mr Kammen objected strenuously to being asked to submit an outline of defence arguments without seeing summaries of secret documents. Originals cannot be shown to the defence because of national security concerns.
“It is the equivalent of me saying to a member of the press, tell us what is in this brief case and you’d better get it right, because if you don’t, we will kill you, because this document may be the critical piece of evidence that the government uses to try and kill Mr Al Nashiri,” Mr Kammen said.

The defence hinted it was anxious to see original, non-summarised medical records from Al Nashiri’s detention in a series of CIA black prisons in Afghanistan, Thailand and Poland where he was subjected to hours of “enhanced interrogation” techniques widely condemned as torture after his arrest in 2002.

The judge also rejected a request by Mr Kammen for additional manpower to translate up to 150,000 pages of “discovery” evidence into Arabic, to enable Mr Al Nashiri to read through all the evidence being presented against him.

“It was extraordinarily frustrating to us … that the judge ruled that Mr Al Nashiri, who speaks very little English, and reads none, is not entitled as a matter of law to translations of the documents underpinning the evidence that the government uses to try and kill him,” he added.

“The subtext of all of this seems to be the cost. It seems to be the attitude of the military that we can kill him [Al Nashiri] and do it cheaply. We think that is transparently unfair.”

The prosecution denied Mr Kammen’s characterisation of the Guantánamo courts, which were reformed in 2009 by the Obama administration to reduce the use of hearsay and rule out evidence obtained under duress or torture.

Brigadier-General Mark Martins, the court’s chief prosecutor, said he was “unapologetic” that Mr Al Nashiri was being submitted to US justice.

He added that the reformed Guantánamo courts were transparent, fair and contained the same “fundamental guarantees of fairness and justice” required by regular US courts, including the defendants right to testify in his own defence.

He also dismissed Mr Kammen’s claims that the Al Nashiri defence team was under-resourced, saying they had six translators at their disposal and had been granted funds to send a private investigator to Yemen to research the case.

He added that resources already provided were in excess of $100,000, not including lawyers’ fees, travel and logistics, a sum that was “comparable to, or in excess of, those provided the defence in civilian court and court-martial capital cases.”

However international human rights groups, several of which were in Guantánamo Bay to watch proceedings, continue to remain highly sceptical of the Guantánamo tribunals.

Reed Brody, a legal counsel for Human Rights Watch, said the accoutrements of a regular court visible in Guantánamo – such as defence lawyers, juries and a judge – were akin to “putting lipstick on a pig”.

“What we have seen today is the gross inequality of what both sides know,” he said, “The defence has one arm tied behind its back as it goes up against the might of the US government, with all the resources it has at its disposal.”

Among the main concerns is the impossibility of independently verifying whether evidence submitted in “summaries” was obtained by proper means.

“The prosecution can present summaries of information, but in many cases we will never know the actual source of the information, or whether the information was obtained by hearsay or torture,” he explained, “they are trying to make the process look fair, when it is not.”

The case was adjourned until July and is scheduled to go to full trial in November this year at the very earliest.