“1776 will commence again if you try to take our fire arms!”

Comment from Alex Jones: I think Piers Morgan and CNN got it right. My appearance last January on his show was one of the biggest media events of the year and clearly showed the gigantic gulf that separates the gun control lobby from those of us that believe in the individuals’ right to keep and bear arms.

I challenge Piers Morgan and CNN to have me back on, and I pledge this time I will not blow up or get in his face. I enjoyed the discussion and want to do it again. If they’re afraid to have me on live, I’ll do it taped via satellite.

Piers Morgan has never had higher ratings as when I was on, and producers have admitted this to me in person when I ran into them in Houston. So if you don’t have me on, it’s because you are afraid of the truth and because you know I won.

So the gauntlet lays at your feet.

It must irk British subject Piers Morgan something awful to know that his most popular show spawned from a petition to deport him.

Yesterday, the gun control proponent asked his viewers to vote for the “ten most memorable moments of 2013.” Among the contenders were his interview with Trayvon Martin friend Rachel Jeantel, rapper Snoop Lion’s interview, in which he recollected getting high with Willie Nelson, and the ill-fated Dr. Oz inoculation episode. 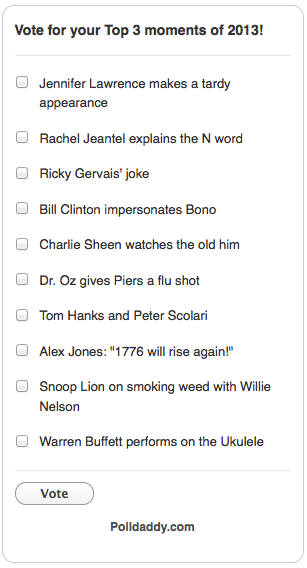 And, number #1 on our #TopMomentsOf2013 goes to @RealAlexJones' on-air rant against @piersmorgan, whom he failed to get deported.

“I think it plays very well to the main theme of the show this year, too,” Morgan said as he presented the number one most memorable moment.

Following the Sandy Hook school shooting, Morgan, along with his liberal media colleagues and handlers at the White House, embarked on a gun grabbing crusade that left gun laws in states like New York and California the worse for wear.

Amid intensifying calls to strip Americans of their right to gun ownership, Infowars and Alex Jones drafted a petition via the White House’s We the People forum demanding Morgan be deported for his “hostile attack against the U.S. Constitution.”

“We demand that Mr. Morgan be deported immediately for his effort to undermine the Bill of Rights and for exploiting his position as a national network television host to stage attacks against the rights of American citizens,” Infowars editor Kurt Nimmo imparted. 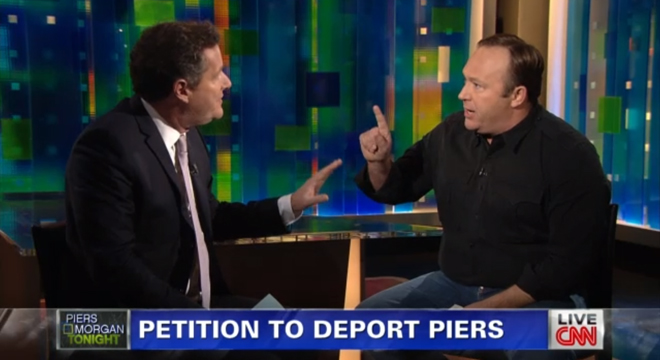 Of course, as Jones explained, Infowars never for once believed Morgan would actually be deported. The idea was merely to use the power structure’s own internal mechanisms to highlight the attack on civil liberties.

Predicting how the war on the Second Amendment would play out wasn’t hard. As Chicago Mayor and former White House Chief of Staff Rahm Emanuel said, “You never let a serious crisis go to waste.”

Just as the 1996 Dublane school massacre in Scotland paved the way for private gun ownership to be made illegal in the U.K., the Obama administration similarly hoped Sandy Hook would rally the masses around gun control.

Instead, it had the exact opposite effect. As National Instant Criminal Background Check System records can verify, more people purchased firearms in 2012 and 2013 than they ever had before, and the renewed assault on gun rights merely served to make Constitutionalists more vigilant.

“I’m here to tell you, 1776 will commence again if you try to take our fire arms,” Alex told the former Daily Mirror editor, who was implicated in a phone hacking controversy. “Doesn’t matter how many lemmings you get out there on the street, begging for them to have their guns taken. We will not relinquish them. Do you understand?”

Once again, here’s Alex’s incredible interview with Morgan from back in January, where he stood up for Bill of Rights, self defense and the right to own guns.

Alex again confronted Morgan when word got out the CNN host was coming to Texas to, of all things, shoot guns.