Gun manufacturer Beretta USA is weighing in on the US election by conducting a special promotion on all gun magazines up til November 8.

“For gun owners this is the most important election ever,” the Italian-based company states on their website.

While not specifically endorsing anyone by name, it can be assumed the company is backing Republican presidential candidate Donald Trump. 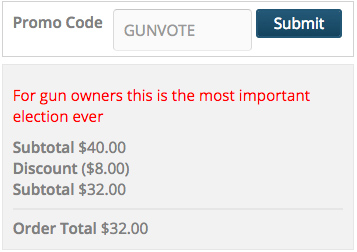 Throughout his campaign, Trump has made it clear he will preserve the Constitution and Second Amendment if elected.

During the third presidential debate, he made a great argument for why justices chosen to serve on the Supreme Court should acknowledge the US Constitution as the supreme law of the land.

The National Rifle Association in May also threw its support behind Trump, an organization the businessman said he and his sons have been a part of “for a long time.”

Hillary, on the other hand, has long embraced “sensible” gun control reform measures that would take guns out of the hands of law-abiding citizens.

After previously supporting a ban on “assault weapons,” leaked audio from a New York fundraiser emerged last year showing Clinton believed the Supreme Court got it “wrong” when it ruled in favor of the Second Amendment.

“We’ve got to go after this,” Clinton stated. “And here again, the Supreme Court is wrong on the Second Amendment. And I am going to make that case every chance I get.”

Earlier this year in July, a Hillary delegate was also caught on camera telling a Project Veritas reporter the ultimate Democrat goal is a total, outright gun ban.