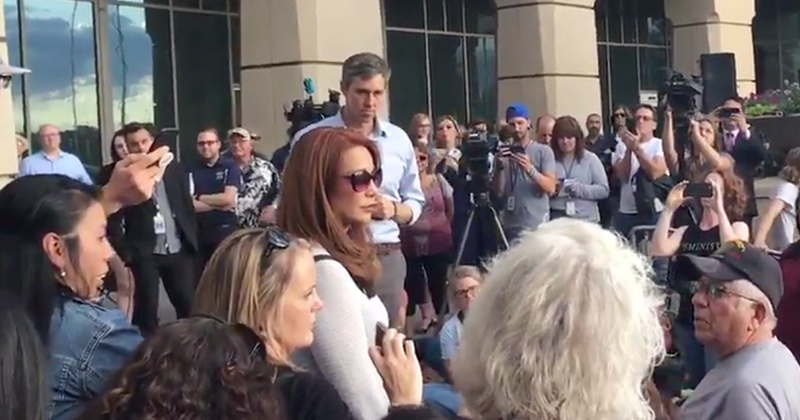 Democrat presidential candidate Beto O’Rourke was confronted by a pro-Second Amendment woman during a town hall event in Aurora, Colorado on Thursday.

Responding to Beto’s now-infamous “Hell yes we are going to take your AR-15, your AK-47,” remark made during the third Democrat primary debate, Lauren Boebert responded, “Hell no, you’re not!”

She tells him “Hell no!”

O’Rourke’s supporters were so rude to the woman that O’Rourke repeatedly has to tell them to knock it off pic.twitter.com/LD9ORGJHHT

“I would like to know how you intend to legislate evil, because it is not the gun, it is the heart of the man,” Boebert continued before being shouted down by Beto supporters.

To his credit, Beto told the crowd to “allow her to finish” and to “be respectful,” however they couldn’t resist hurling insults at her.

The woman then explained her personal reason for carrying a firearm, saying, “I have four children, I am 5-foot-0, 100 pounds, I cannot really defend myself with a fist. … I want to know how you’re going to legislate that because a criminal breaks the law, so all you’re going to do is restrict law-abiding citizens, like myself.”

Meanwhile, Beto was met with resistance again, this time by CNN host Chris Cuomo who he likely assumed would praise his anti-Second Amendment agenda.

When Cuomo asked Beto, “Are you in fact in favor of gun confiscation?” the Democrat candidate replied, “Yes … I don’t want you, or anyone else to get into the fear-mongering … that the gov is going come and take your guns.”

“It’s not about fear-mongering. You just said it, Beto” Cuomo quipped, adding, “I don’t think you can do it, legally. The Heller case makes it pretty clear that there’s an individual right to own, and I don’ t think we’ve ever seen the US government do a taking of private property, like what you’re suggesting.”

CNN's Cuomo: "Are you in fact in favor of gun confiscation?"

Beto: "Yes … I don't want you, or anyone else to get into the fear-mongering … that the gov is going come and take your guns"

Cuomo: "It's not about fear-mongering. You just said it, Beto" pic.twitter.com/GshnjrSpHl