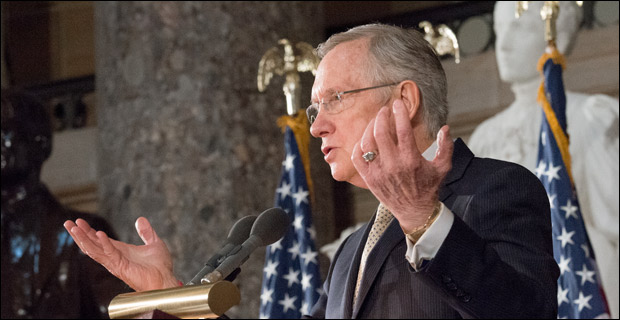 On Thursday, Sen. Harry Reid, who has been at the center of the Nevada rancher standoff controversy, responded to a New York Times propaganda report that Cliven Bundy is a racist.

“I used to live in North Las Vegas and it is home to some of the hardest-working people I have ever met – men and women who embody the American dream by working hard every day to build a better life for themselves and their families. By contrast, Cliven Bundy has spent decades profiting off government land while refusing to pay the same fair use fees as his fellow ranchers. Today, Bundy revealed himself to be a hateful racist. But by denigrating people who work hard and play by the rules while he mooches off public land he also revealed himself to be a hypocrite.

“To advance his extreme, hateful views, Bundy has endangered the lives of innocent women and children. This is not a game. It is the height of irresponsibility for any individual or entity in a position of power or influence to glorify or romanticize such a dangerous individual, and anyone who has done so should come to their senses and immediately condemn Bundy. For their part, national Republican leaders could help show a united front against this kind of hateful, dangerous extremism by publicly condemning Bundy.

“The bottom line is that elected officials and those in positions of power or influence have a responsibility to unite behind the basic principle that we are a country of laws, and that whatever our differences, it is unacceptable for individuals to use violence or the threat of violence to advance their radical views.”

Reid has apparently put up a mental block on racist remarks he himself has made in the past. In the 2010 book “Game Change,” Reid was quoted as calling President Obama a “light-skinned” African American who had “no negro dialect..”

Here’s the passage Sen. Reid would prefer we forget:

“He (Reid) was wowed by Obama’s oratorical gifts and believed that the country was ready to embrace a black presidential candidate, especially one such as Obama – a ‘light-skinned’ African American ‘with no Negro dialect, unless he wanted to have one,’ as he later put it privately.”

Later, Reid told The Atlantic he regretted “using such a poor choice of words,” stating, “I sincerely apologize for offending any and all Americans, especially African-Americans for my improper comments.”