Breaking news tonight of another attack at a movie theater, this time in Antioch, Tennessee. Thankfully, no one wound up seriously injured.

The story at this time is that a 29-year-old named Vincente David Montano who had been reported missing to Texas police by his mother wound up in a showing of Mad Max: Fury Road and attacked his fellow patrons. Motive is still unknown at this time according to reports.

Details are still coming in and have been just a bit sketchy. By sketchy, we’re talking about things like this:

Is he a 51-year-old local man, or a 29-year-old missing Texas man with a pellet gun, hatchet, mace and serious mental issues? Montano had apparently be committed four times previously, twice in 2004 and twice in 2007.

Calls did go out that it was active shooter on the scene, but it turns out the guy had an airsoft pellet gun which cops were quick to point out looks like a real gun. It has been reported that when a cop ran into the theater, Montano fired his pellet gun once toward the officer, and the officer retreated.

However, the suspect didn’t shoot anyone or attempt to shoot anyone in the theater (if so, that has not been reported at this time). Clad in a surgical mask, he instead attacked another man with a hatchet, hitting and superficially wounding him, and he pepper sprayed that man as well as two other female moviegoers. There were eight total people in the theater including Montano. No one was taken to the hospital.

He also apparently had two backpacks, one containing a hoax (fake) bomb device. Sounds like a movie itself, doesn’t it?

SWAT took Montano out as he ran out of the back door of the theater; he died in the parking lot.

The mainstream media, however, is still running full speed ahead with the theater shooter story anyway.

Here’s how CNN is currently portraying this event: 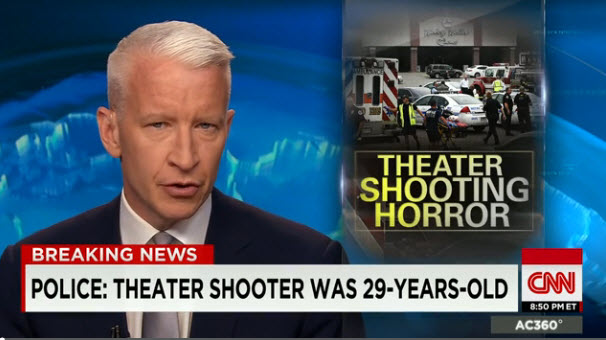 The list goes on. But was this guy really a “gunman” the likes of, say, John Russell Houser or James Holmes?

People who watch TV without paying attention will think so.

How long until this, also, is used to scare people more and further push Obama’s gun control initiatives?

And how long until we find out just how many SSRI antidepressant drugs this man was on (or just recently off)?