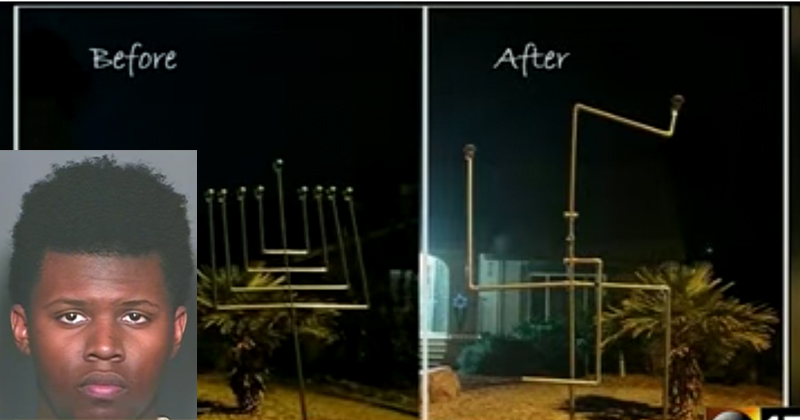 An Arizona man and three teens were arrested last week suspected of perpetrating an anti-Semitic hate crime involving a menorah statue that was reshaped into a swastika.

Chandler police on Friday arrested Clive Jamar Wilson, 19, and three other teens whose names were not revealed due to their age, on charges of first-degree criminal trespass and aggravated criminal damage.

The incident which happened on December 30 received widespread attention, and left a Chandler family celebrating Hanukkah notably shaken. Chandler police detectives also reached out to the FBI for assistance.

Wilson admitted in a Facebook post Sunday to carrying out the vandalism and apologized, claiming the act was “a very insensitive prank.”

“I have friends from many different backgrounds and cultures. Last December during the holiday season I made a mistake when I joined my friends in a very insensitive prank. If I could turn back the clock and remove myself and my three friends from participating in the horrible prank I would. But I can’t,” Wilson stated on Facebook.

“What we did was reckless, stupid, idiotic, and insensitive. From the bottom of my heart I apologize to your family,” he also wrote.

The family’s patriarch, Seth Ellis, explained he’d built the menorah with his sons aged 5, 7 and 9, using $100 worth of PVC pipe.

“Just waking up to see that first thing is kind of rattling,” Ellis said following the crime. “It just makes me sad and it makes me feel sick that’s still how people look at the world in 2016.”

The Washington Post described Ellis’ discovery of the reconfigured menorah:

Seth Ellis, who works in construction, got up Friday morning at 4 a.m. as usual, and saw that while the family was sleeping, the menorah’s joints had been unscrewed and locked back in place in the spidery directions of a swastika. The vandal or vandals had taken some of the pieces entirely. The Ellises called the police.

Ellis and his wife were able to disassemble the swastika with help from police before the children were able to witness it.

Naomi Ellis asserted the family was “victimized by hate,” and said her children were aware of the anti-Semitic history behind the swastika symbol.

“They know about the Holocaust. They know about Nazis,” Naomi said. “This is the real reality that we live in: People hate us for no reason or want us to feel scared for who we are. That’s not something I wanted to have to tell them.”

Despite a seemingly heartfelt Facebook apology, the FBI is reportedly still investigating whether the incident constituted a “hate crime.”

Sputnik News has more on the legal implications behind the crime:

Under Arizona law, these are both Class 6 felonies, the least serious classification. Most Class 6 felonies are punished with one to two years in prison. It is possible for the court to decide to try the defendants as if they committed a misdemeanor instead, but as they have been charged with an aggravated crime — meaning the damage done was lesser than the intent of the crime — that is unlikely to occur.

Arizona law sharply increases sentencing time for past offenders. Class 6 felonies can be punished with up to 6 years in prison if the convicted has two or more prior convictions. It is likely that the three juveniles will be tried as adults.

The suspects were detained, processed, and then released pending the submission of charges to the Maricopa County Attorney’s Office. CPD spokesman Kevin Quinn has announced that the investigation is still ongoing.