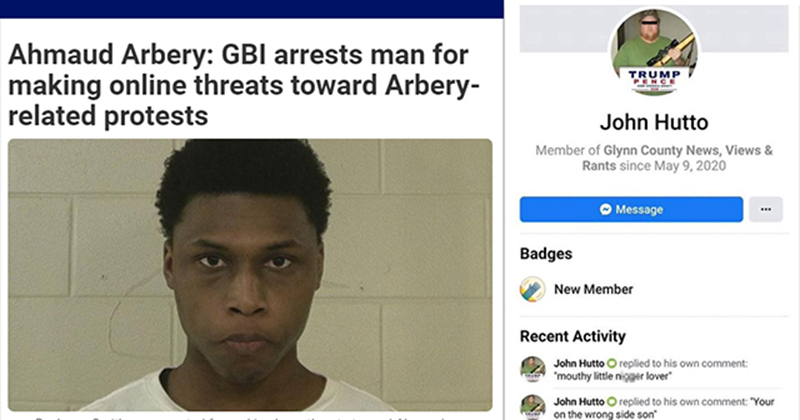 Rashawn Smith, 20, was arrested on Sunday for allegedly creating a fake Facebook profile of a racist white Trump supporter to issue “hoax” terroristic threats against pro-Ahmaud Arbery protesters, according to the Georgia Bureau of Investigations.

[Rashawn Smith] was taken into custody in Midway, Ga. and charged with dissemination of information relating to terroristic acts, which carries a punishment of up to ten years in prison, $100,000 fine, or both.

“The GBI has arrested Rashawn Smith, age 20, & charged him with Dissemination of Information Relating to Terroristic Acts for a Facebook post that contained a threat to future protests related to Ahmaud Arbery,” the GBI said. “Smith created a Facebook User ID of an unwitting individual to post a hoax threat.”

Not one single mass media news outlet covering this story shared the fake profile Smith allegedly created or the hoax threat he issued. Action News Jax was the only outlet which appears to have shared Smith’s mugshot.

The Georgia NAACP shared a screenshot of the threat and fake profile on Sunday and said they reported it to the GBI and Glynn County Sheriff.

The profile Smith allegedly used was a white man under the fake name of “John Hutto” holding a rifle with a “Trump-Pence Keep America Great 2020” banner prominently displayed.

Smith appears to have used this fake profile to call people “n****r lovers,” sing the praises of the McMichaels and threaten to stage a mass shooting at a courthouse in Brunswick where protesters were gathering if the protests didn’t stop. The threats were used by the media to advance the phony narrative that white people are “hunting” black people for no reason but now that the hoax was exposed outlets such as WSBTV are neglecting to share his mugshot or identify his race.