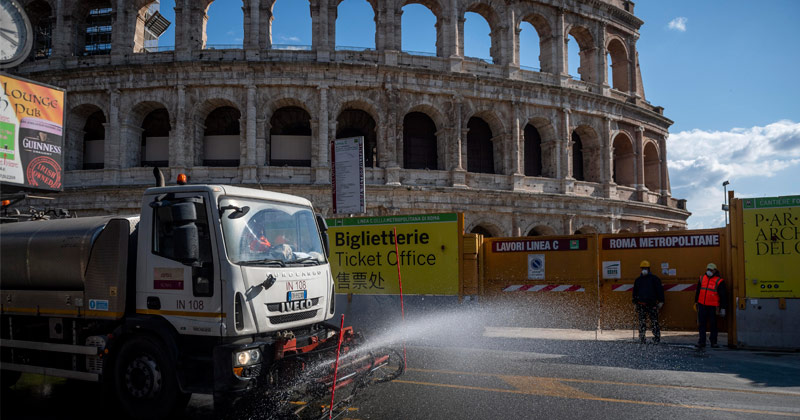 Coronavirus has ravaged Italy due in part to the country’s large, mobile Chinese population combined with Italy’s aging demographics.

The country leads the world in officially reported deaths contributed to coronavirus and is second only to China in confirmed cases.

Due to economic globalism over the past several decades, Italy has become home to a massive wave of Chinese workers and business owners who freely travel between Italy and mainline China, where Covid-19 first broke out.

To put it in perspective, over 70% of foreign-owned businesses in Prato, a city in central Italy, are owned by Chinese – and more firms in Prato are owned by foreigners than Italians.

“Prato has evolved and grown in terms of population, but the majority… how can I say it… the majority it’s all Chinese,” a constructor worker told ecnmy.org. “That ‘something’ that there was before isn’t there anymore, Prato’s traditions, the feasts… on the 15th of August we used to go to Feast of Santa Maria, we’d eat watermelons, you’d go there and see all the people from Prato… now what you see, it’s mostly managed by [the Chinese]…”

This shift began in the 90s when the region’s textile industry started employing Chinese migrant workers due to Italian laws which gave less incentive for Italian workers to seek employment in shoe and cloth factories.

Now many of the city’s shops, restaurants and businesses are owned by Chinese nationals who cater particularly to the region’s large Chinese population.

Some of these businesses got a head start because they ignored employment and safety laws – and took advantage of slave labor imported from China, states a 2017 HuffPost article.

According to the article:

“They started connecting to mainland China, offering the prized Made in Italy label. They diversified production by launching into garmenting and accessories. They enlarged the boundaries by reaching the frontiers of Florence (where the above mentioned protest took place) and entering the lucrative business of leather goods. Of course, most of them kept working illegally. The Chinese triad saw a business opportunity in this for human trafficking and launched a scheme whereby they sponsored workers to travel to Italy and work with no pay: a form of modern slavery.”

Thus it shouldn’t be surprising that a contagious disease which originated in China would hit Italy particularly hard.

It’s also worth pointing out that elderly people seem most at-risk from dying of the coronavirus due to having other health complications – and Italy has one of the world’s oldest populations.

Italy’s median age is almost 46 years old, according to the Istituto Nazionale di Statistica, and almost a quarter of the population is over 65.

Constitutional lawyer Robert Barnes issued a message to President Trump on what he needs to do to end the destruction of our economy.