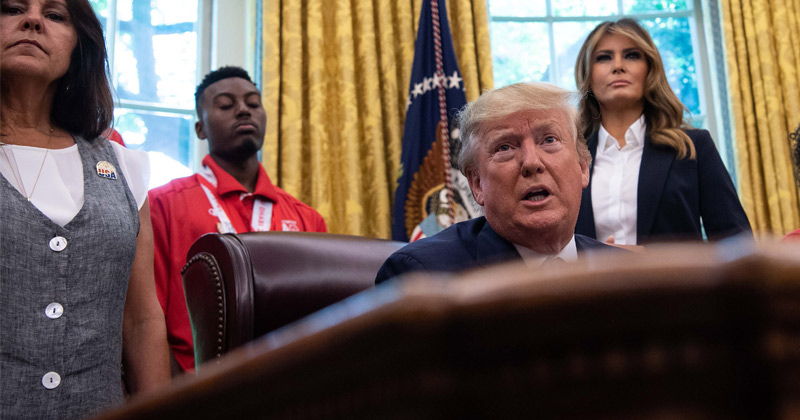 If the Dept. of Justice is considering an investigation of Rep. Ilhan Omar (D-Minn.), it would make sense why President Trump, as chief executive, would disavow the “Send Her Back” chant made by supporters at a recent rally.

Justice must maintain its characteristic of impartiality, and if the nation’s chief executive of law is advocating the deportation of someone under investigation for immigration offenses, that could taint the impartiality of the investigation.

And keep in mind that the president didn’t start the chant at the rally in North Carolina.

“So it would be imperative for President Trump to avoid any appearance of being responsible for persecuting her,” wrote Thomas Lifson of American Thinker. “Instead, he must keep hands off the DOJ and hands off any effort to expel Omar.”

“The wheels of justice, the old saw has it, grind slowly but grind very fine.”

Lifson also reports that “there is mounting evidence that has been shunned by the media that Rep. Ilhan Omar has committed tax and immigration fraud.”

Some of the evidence he cited includes verified court documents signed by Omar, which is exactly the kind of evidence the DOJ would need if the department feels it has a tangible case.

In contrast, the last thing the DOJ needs is to be accused of acting on behalf of a president for political gain.

Of course, that’s exactly what happened in the aftermath of the Mueller probe, but Special Counsel Robert Mueller offered little to no evidence to begin with.

That might not be the scenario here if Lifson is correct, meaning that the biggest thing that could derail an investigation is the president himself.