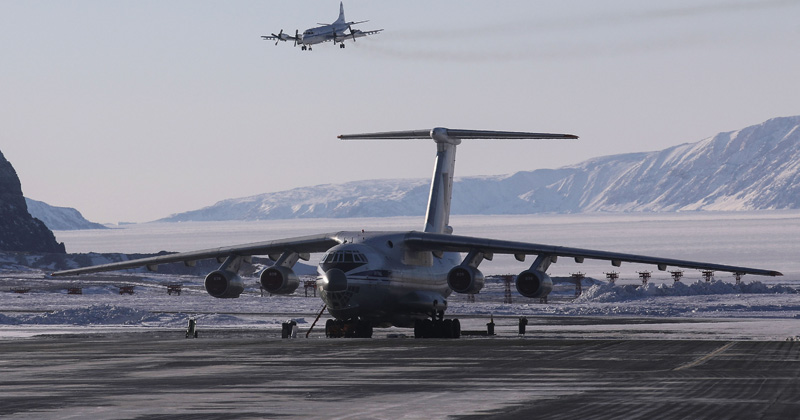 For several years, Russia and China have been ramping up their military operations in the Arctic, which would explain why President Trump is floating the idea of purchasing Greenland, or at least maintaining a presence on the island.

In a report entitled “President Trump Eyes a New Real-Estate Purchase: Greenland,” the Wall Street Journal focuses on Trump’s experience as a real estate developer, but when a proposed Greenland purchase is viewed through the eyes of an U.S. president privy to national security concerns, it becomes clear that Russia and China are major factors behind the decision.

For one thing, the proposed National Defense Authorization Act for 2020 already states that the US military needs to establish a strategic port in the Arctic:

SEC. 1099T. DESIGNATION OF DEPARTMENT OF DEFENSE STRATEGIC ARCTIC PORTS.
(a) Sense Of Congress.—It is the sense of Congress that—

(1) the Arctic is a region of strategic importance to the national security interests of the United States and the Department of Defense must better align its presence, force posture, and capabilities to meet the growing array of challenges in the region; and

(2) although much progress has been made to increase awareness of Arctic issues and to promote increased presence in the region, additional measures, including the designation of one or more strategic Arctic ports, are needed to show the commitment of the United States to this emerging strategic choke point of future great power competition.

The US was already at a disadvantage given that Russia has over 7,000 miles of coastline in the Arctic, not to mention that Putin already ordered a military build-up in the Arctic back in 2014.

“Russia is returning to the Arctic and ‘intensifying the development of this promising region’ so it needs to ‘have all the levers for the protection of its security and national interests,’ Putin said on Tuesday at an expanded meeting of the Defense Ministry Board,” RT reported at the time.

Additionally, China claimed it’s an “near-Arctic state” in its official Arctic Policy released last year and aims to create a “Polar Silk Road” in a partnership with Russia that would grant China an economic boost in the region – and the Pentagon has already taken notice.

“China aims to participate ‘in the exploration for and exploitation of oil, gas, mineral and other non-living resources’ in the Arctic,” reported The Diplomat. “However, the white paper also places a particular emphasis on nontraditional energy sources: ‘The Arctic region boasts an abundance of geothermal, wind, and other clean energy resources,’ the paper said, ‘China will work with the Arctic States to strengthen clean energy cooperation.’”

A 2008 US Geological Survey described the “tremendous resource potential” of the Arctic, estimating that there’s at least 90 billion barrels of oil and 1,670 trillion cubic feet of natural gas in the Arctic that are “undiscovered and technically recoverable.”