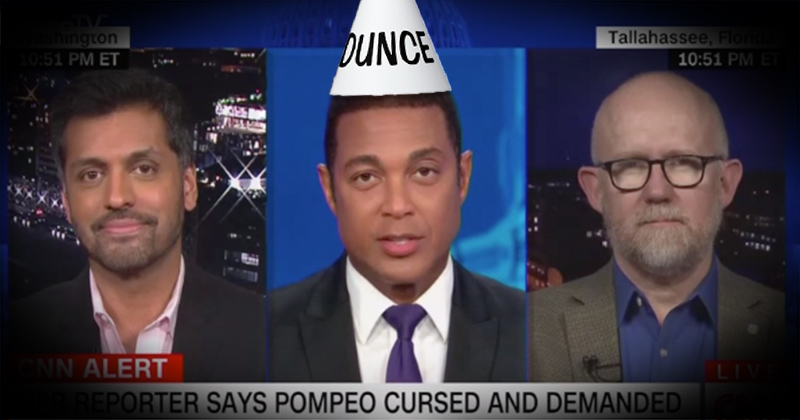 Watch below as Lemon and two CNN guests ridicule the intelligence of Trump and his base.

The arrogance, the dismissiveness, the smug cackling, the accents.

If Donald Trump wins re-election this year, I’ll remember this brief CNN segment late one Saturday night in January as the perfect encapsulation for why it happened. pic.twitter.com/8kQ6zN9AZV

In fact, PJ Media reports, “Conservative Republicans have consistently scored significantly higher than the rest of the public combined on the 22 General Social Surveys using the verbal ability scale since 1974.”

In the field of science, Trump supporters scored “significantly” higher than Clinton voters.

Reason.com reported, “Less than half of 2016 Clinton supporters (49.6%) are able to answer correctly both of two related questions: whether the earth goes around the sun or the sun goes around the earth (EARTHSUN) and whether that takes a day, a month, or a year (SOLARREV).”

“Remember these two questions are multiple choice!” Reason continued. “You would have a 50-50 chance of guessing correctly on the first part: whether the earth goes around the sun or vice versa. Sadly, the general public didn’t do hugely better than Clinton supporters, with only 57.1% (compared to 49.6%) knowing that the earth goes around the sun and that it takes a year to do so.”

That’s right, less than half of the Hillary voters who participated in the survey could tell you the earth revolves around the Sun and that it takes one year to do so.

The GOP was smart enough to turn the clip into an advertisement for Republicans in the upcoming election.

THIS is what the liberal elites think of you.

Prove them wrong where it counts—at the ballot box in November! pic.twitter.com/cmhPJjPT65