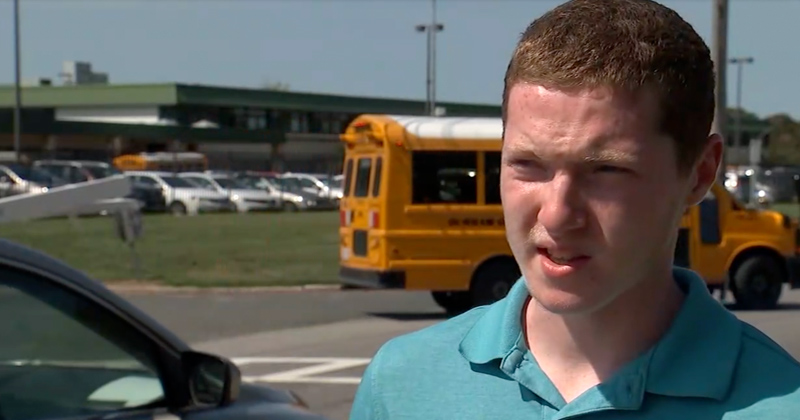 A high school senior in New York state was suspended for attempting to show up and attend classes in-person.

Maverick Stow, 17, showed up to William Floyd High School in Long Island on the first day of school, September 8, eager to start his last year of high school.

Stow got a temperature check and proceeded to go to his first period course, where the teacher noted he was not listed on the roster.

After being sent to the principle’s office, he was instructed to leave the school and resume online classes at home, but Stow says he shot back, “‘Well, no, I think I need to go to class. This is during class time,’” and went back to class.

“He finished classes the rest of the day unimpeded, but at the end of the day school officials informed him he was being suspended for five days” for insubordination, reports WABC.

The suspension came as a shock to the student, who called the punishment unacceptable.

Both his parents expressed outrage at the school’s decision, arguing students should be returning to classes despite the coronavirus restrictions.

“My son is being suspended because he wants to be in school,” Stow’s mom said.

“Kids need to be in school every day. Virtual learning is not learning.”

Stow’s dad added, “He’s a very smart kid. He knows what he’s doing. When he said this is how he wanted to handle things, we were like, ‘Then go for it.’”

Reached for comment, a representative for the William Floyd school district stood by its decision to punish the boy, claiming students are required to observe their “in-person days” to reduce the risk of coronavirus transmission.

“In order to adhere to these guidelines, it is imperative that students attend school during their scheduled in-person days only. Students who refuse to adhere to their scheduled in-person days and/or flagrantly disregard directives to leave school grounds and cause a disruptive environment for other students, will face disciplinary actions,” said the district’s Public Relations Director, James Montalto.

Stow responded to the school’s statement with logic and reason, arguing, “The virus doesn’t discriminate on Mondays or Tuesdays or Thursdays or Fridays. That’s not how it works.”

The bait-and-switch tyranny of college, the lunacy of school buses in COVID era