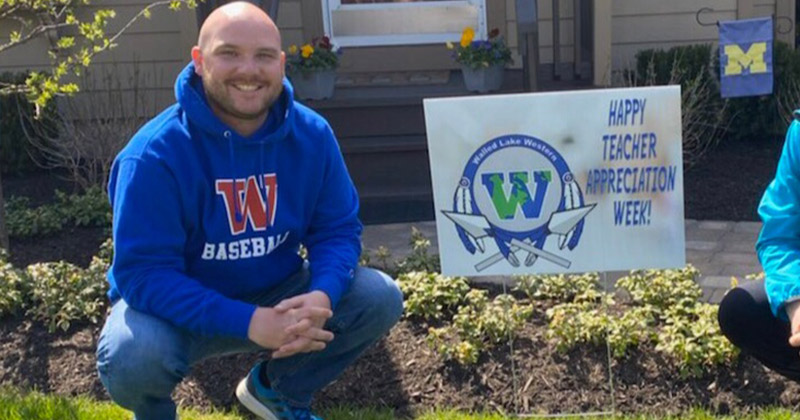 All it took for a popular Michigan high school teacher and coach to get fired was a simple social media post reading, “I’m done being silent. Donald Trump is our president. Don’t @ me.”

I’m done being silent. @realDonaldTrump is our president ❌🧢

Justin Kucera, a social studies teacher and varsity baseball coach at Walled Lake Western High School, posted the tweet on July 6th and was given the option to “resign or be fired” only four days later.

“I was required to meet with [human resources], the superintendent, and my principal [on July 10]. They initially took my statement on why I tweeted those tweets and they told me they would have a decision about my future employment in the upcoming days. When they completed the meeting, I was told I had the option to either be fired or resign,” Kucera told The Washington Free Beacon.

Kucera said he didn’t mean for the tweet to be divisive, explaining, “I know a lot of people are just rooting for Trump to fail, and I don’t think that anybody should do that. Agree with him or not, you should want the president to do well. I apologized that [my tweet] brought so much negative attention, but I’m not sorry for what I said.”

A recent graduate of the high school spoke out on the coach’s behalf, saying, “Prior to Mr. Kucera’s tweet, I cannot recall an instance where he shared his political affiliations while teaching or coaching. My political views have no impact on how I feel towards Mr. Kucera. Mr. Kucera has always been supportive of me as my AP World History and student leadership teacher and as my baseball and basketball coach.”

A parent of two Walled Lake Western students who said he “knows Justin very well” commended Kucera for being “apolitical” when having conversations with students.

“He always tried to stay right down the middle, avoid [political] conversations, and let the students make their own call based on their own life experiences,” the parent stated.

How far will left-wing cancel culture go before Americans stand up for themselves?