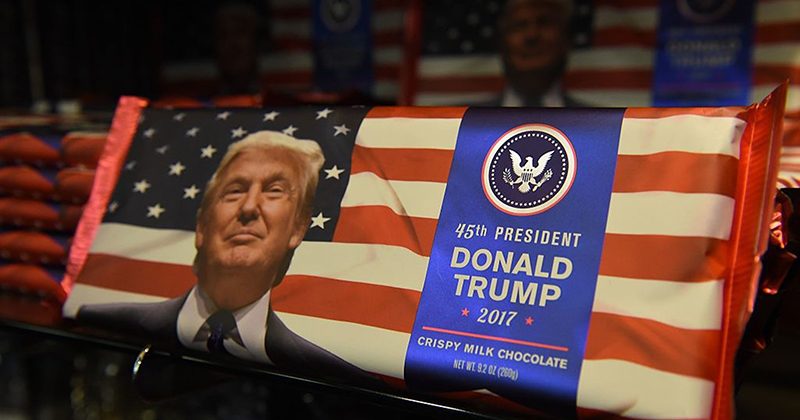 Candy bars made and sold by a small family-run business have triggered leftists into a frothing frenzy because they are adorned with President Trump’s smiling face.

At JFK airport Terminal 1 I found this display of Trump branded chocolate for sale. It’s been there for a long time. The staff told me not one piece has sold. Why would they think foreigners would spend money on his picture is beyond me. pic.twitter.com/234cpus3D0

Or really anyone for that matter who is flying thru there. Maybe they should try an airport in Laramie, or perhaps Vladivostok

Moscow Sheremtyevo airport is sold out. 😉

When I pass those displays I turn the chocolate bars around.

I bought a bar at JFK Terminal 1 and my son made a voodoo doll out of it.

Good lord America. This is the sort of thing you'd expect to see at Pyongyang Airport.

This is what North Korea would do. Why is this even being sold?

The candy is made and sold by New York-based Astor Chocolate, an American family run business in operations since the 1950s.

Of course, it’s nothing new. There was no problem with this when the savior was President:

Lets enjoy more of the triggering:

Candy bars w/ Trump’s picture on the label are the epitome of “kitsch.” They have so many uses beyond your typical chocolate bar:
– for city dwellers without access to coal, great “you’ve been bad” Xmas items
– Halloween “Tricks”
– “Ironic” gifts on April 1, with#Triggered

Last time i saw something like this was at Pulkovo Airport in St. Petersburg, but with Putin’s face on every piece of merch.

Can he just put the presidential seal on his merch?

I feel like he has stained the presidency forever, unless the next president makes profound changes to get money and corruption out of politics.

We will be remembered as the once great nation, so oblivious to our weakness