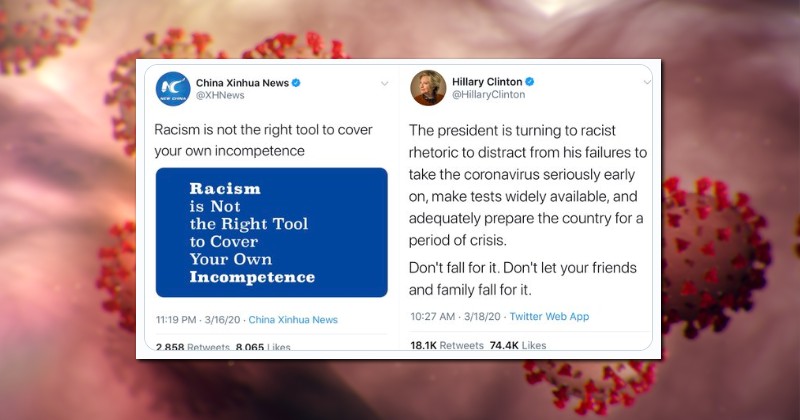 Hillary Clinton and much of the mainstream media continue to amplify Chinese Communist Party propaganda by accusing President Trump of ‘racism’ for blaming Beijing for the coronavirus.

Trump was once again scolded by a reporter during his White House press conference today for referring to COVID-19 as the ‘Chinese Virus’, despite this being a completely accurate description given that the virus originated in Wuhan, China.

The media is STILL upset that Trump calls it the 'Chinese Virus'.

In doing so, they're still amplifying rhetoric directly from the Chinese Communist Party that to do so is "racist," despite the fact that it's completely accurate.pic.twitter.com/exq0AUgX6K

Hillary Clinton also claimed Trump was “turning to racist rhetoric to distract from his failures to take the coronavirus seriously.”

This claim almost directly mirrors the narrative from Chinese state media news agency Xinhua, which tweeted, “Racism is not the right tool to cover your own incompetence.”

Both the media and people like Clinton are directly amplifying Chinese propaganda by suggesting that Trump blaming China for the outbreak is a dangerous form of “racism” that will lead to Chinese people being violently attacked.

Beijing has repeatedly tried to absolve itself of blame for the spread of coronavirus by spinning the narrative that Trump trying to hold them accountable is “racist.”

The media blame game continues despite the fact that China is solely to blame for the spread of coronavirus.

– The virus was allowed to massively spread because China covered it up for a month.

– Even as the threat of a global pandemic loomed large, China threatened to withhold medical supplies (which they have a near monopoly over) from the United States.

– China’s Foreign Ministry spokesman suggested the U.S. military was to blame for coronavirus. This claim was then embraced by official Communist Party mouthpieces.

Trump keeps calling COVID-19 the ‘Chinese Virus’ in an effort to repel China’s propaganda that they weren’t to blame for the spread of coronavirus (they were), and that the true source of the virus was actually the United States.

And the media has chosen to side with the Communist Chinese. Because orange man bad.