In a tweet shared Friday, the former First Lady used the 8-year anniversary of the Haiti earthquake as an opportunity to attack the president over alleged remarks reported in The Washington Post.

The anniversary of the devastating earthquake 8 years ago is a day to remember the tragedy, honor the resilient people of Haiti, & affirm America’s commitment to helping our neighbors. Instead, we‘re subjected to Trump’s ignorant, racist views of anyone who doesn’t look like him.

“The anniversary of the devastating earthquake 8 years ago is a day to remember the tragedy, honor the resilient people of Haiti, & affirm America’s commitment to helping our neighbors,” Clinton wrote.

“Instead, we‘re subjected to Trump’s ignorant, racist views of anyone who doesn’t look like him.”

The tweet follows a turbulent news cycle Thursday, where the president was quoted by The Washington Post as labeling Haiti, El Salvador and African nations “shithole countries,” despite denying he used the language.

Clinton’s tweet was delivered without a hint of irony, even as people in Haiti still struggle after relief funds were squandered by The Clinton Foundation.

Throughout his presidential campaign Trump made it a point to call attention to the Clinton Foundation’s misuse of donations meant to help Haitian victims of the 2010 earthquake.

“Clinton was responsible for doing things a lot of the Haitian people are not happy with,” Trump stated. “Taxpayer dollars intended for Haiti and the earthquake victims went to a lot of the Clinton cronies.”

During a Town Hall in Miami, Trump also heard criticisms from former Senate President of Haiti, Bernard Sansaricq, who called for an audit of the Clinton Foundation.

“In 2010, the earthquake of Haiti, not only American taxpayers, but the whole world has given billions of dollars to the Clinton Foundation for the Haitians. Not even two percent of that money went back to Haiti,” Sansaricq told Trump in a face-to-face meeting. “So Mr. Trump we are asking you, begging you – the Haitian community will side with you if one day you ask Hillary Clinton publicly to disclose the audit of all the money they have stolen from Haiti in 2010 after the earthquake.” 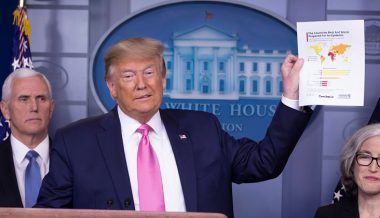