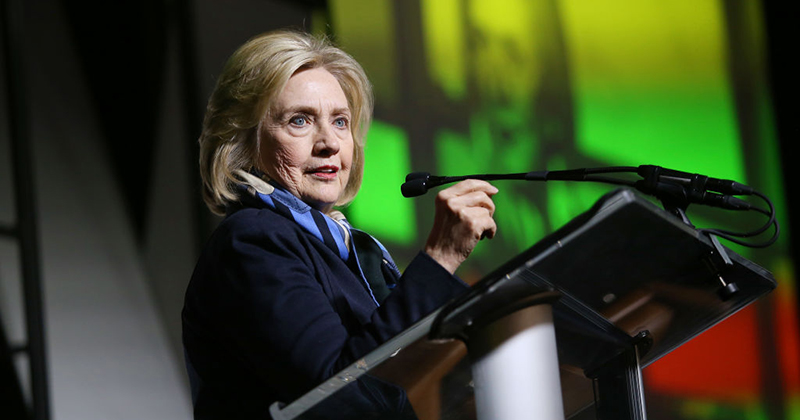 Last week, Hillary Clinton dispelled rumors that she might toss her hat in the ring in a “brokered convention” to run against President Trump.

She told Variety  that while she has the “urge” to run, she’s “going to support the people who are running now and do everything I can to help elect the Democratic nominee.”

According to The Hill‘s Douglas MacKinnon, however, Clinton may be in negotiations with former Vice President (and current frontrunner) Joe Biden, former NYC Mayor Michael Bloomberg, or she may try to team up with whoever gets the Democratic nomination.

MacKinnon writes in a Saturday Op-Ed that Clinton “would add the gravitas, delegates and, eventually, millions of votes needed to get them over the finish line on Nov. 5.

Forget what the mainstream media and establishment politicians are telling you, the Constitution clearly says Chief Justice Roberts doesn’t have the tie-breaking vote in impeachment as Richard Proctor, BathroomEconomics.com, explains.

I am assured that Clinton is on every shortlist for that position,” adding “If I were in Trump’s world, this scenario would send chills down my spine.”

There is no doubt that the former first lady, New York senator and secretary of State once again is raising her profile and stepping back into the spotlight to reengage in political discussions.

One such spotlight was provided by the Sundance Film Festival in Park City, Utah. There, aside from commenting on her presidential “urge,” Clinton not only promoted the incredibly flattering four-part Hulu documentary about her, titled “Hillary” — which premiered, coincidently, just 10 days before the Iowa caucus — but she also attended the debut of a documentary about the murder of Washington Post columnist Jamal Khashoggi. –The Hill

Also noted is Clinton’s recent attacks on Sen. Bernie Sanders (I-VT), calling him “not a team player” and claiming that people ‘don’t like him’ (for which she was booed by Rep. Rashida Tlaib (D-MI) at a Sanders rally on Friday). Clinton also went after Facebook in lockstep with George Soros, who said that the Silicon Valley giant was conspiring with the Trump reelection campaign to win in November.

Speaking with The Atlantic from the Sundance Film Festival in Park City, Utah, Clinton said that Facebook CEO Mark Zuckerberg is an “authoritarian” who “intend[s] to reelect Trump.”

Will Clinton team up with Biden, or Bloomberg, or literally anyone to take one more bite at the apple? Only time will tell.