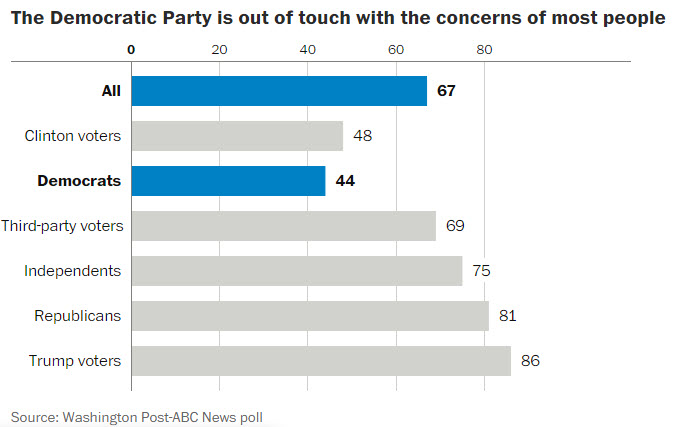 Denial is not just a river in Egypt.

Speaking during an interview on CNN, losing presidential candidate Hillary Clinton explained why she thinks she lost the election…

Hillary Clinton: I was on my way to winning until Comey's letter and WikiLeaks https://t.co/13muAmpjxk

“I was on the way to winning before Jim Comey’s letter and ‘Russian’ Wikileaks… scared off late voters.”

So to be clear – until the head of the FBI admitted to the world that many of your actions were under investigation for potentially breaking law and WikiLeaks published ‘proof’ of multiple mis-dealings and relationships – you were on the way to winning? So, other than that how was the play Mrs. Lincoln?

All of this is ironic given Democratic Party strategists recent comments:

After crunching numbers for months, a group of Democratic strategists have finally figured out why Hillary lost the 2016 election:  “her base didn’t turn out.”  Sure, it probably had absolutely nothing to do with all those criminal FBI investigations or the fact that Trump was able to flip some Midwest states that haven’t gone Red since Ronald Reagan.  Per McClatchy:

A select group of top Democratic Party strategists have used new data about last year’s presidential election to reach a startling conclusion about why Hillary Clinton lost. Now they just need to persuade the rest of the party they’re right.

Many Democrats have a shorthand explanation for Clinton’s defeat: Her base didn’t turn out, Donald Trump’s did and the difference was too much to overcome.

Ironically, while offering up the most ridiculous explanation possible for the outcome of the 2016 election, undoubtedly in an effort to erase all blame from Hillary herself (it wasn’t Hillary’s fault, her team just didn’t turn out the voters…they failed her), one strategist noted it’s important to “learn the right lesson from 2016” and not just the one “that makes us feel good at night.”

And as The Washington Post’s most recent poll shows, two-thirds of Americans think the Democrats are out of touch – including nearly half of Democrats themselves. 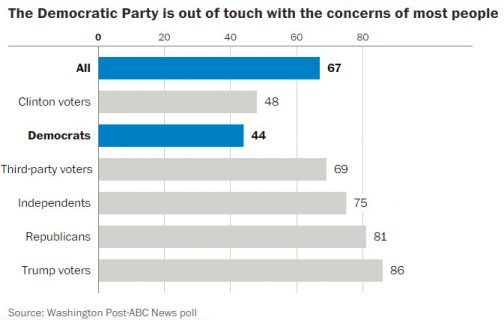 It’s worth highlighting that last point. While the political opposition generally views Trump or either party as about equally out of touch – with about 80 to 90 percent saying so – the Democratic Party is viewed as far more out of touch by Democrats than Trump or the GOP are by Republicans.

“What happened was that this was the first campaign that I can recall where my party did not talk about what it always stood for — and that was how to maintain a burgeoning middle class,” Biden said during an appearance at the University of Pennsylvania.

“You didn’t hear a single solitary sentence in the last campaign about that guy working on the assembly line making $60,000 bucks a year and a wife making $32,000 as a hostess in restaurant.”

“And they are making $90,000 and they have two kids and they can’t make it and they are scared, they are frightened.“

Despite calling half the nation ‘deplorable’ and beyond help, Clinton did attempt to speak to working class voters on the campaign trail, including through multiple bus trips through Pennsylvania, Ohio, Kentucky and West Virginia. But the overarching message of her campaign, especially at the end, (and The Democrats since), was more often anti-Donald Trump than policy messaging toward these voters.

Other highlights from Hillary’s interview (via Axios)

“I’m now back to being an activist citizen and part of the resistance,” @HillaryClinton says pic.twitter.com/V8s7ZEN5wR