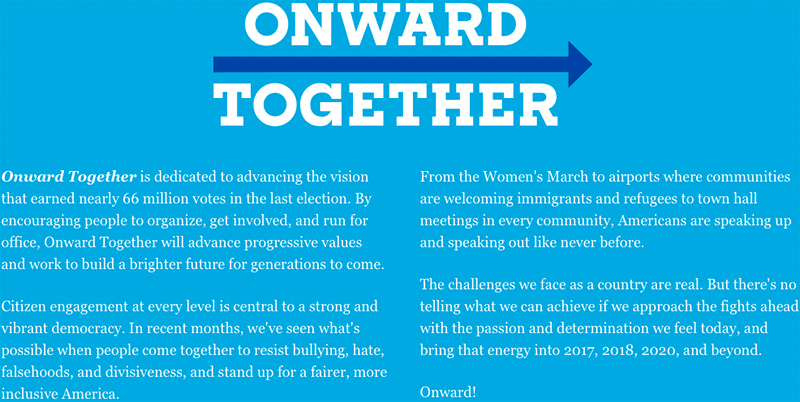 The former secretary of state unveiled her Onward Together 501(c)(4) non-profit via Twitter, claiming she’s spent the last few months reflecting on her defeat, and “yes, taking walks in the woods.”

We're launching Onward Together to encourage people to get involved, organize, and even run for office. https://t.co/8exooosvZ5

On the Onward website, the group claims its mission is to advance “the vision that earned nearly 66 million votes in the last election.”

“By encouraging people to organize, get involved, and run for office, Onward Together will advance progressive values and work to build a brighter future for generations to come,” the site states.

“The challenges we face as a country are real. But there’s no telling what we can achieve if we approach the fights ahead with the passion and determination we feel today, and bring that energy into 2017, 2018, 2020, and beyond.”

By registering as a 501(c)(4), Clinton’s new organization can accept unlimited amounts of money from donors whose names are not required to be disclosed, notes NTKnetwork.com.

501(c)(4)s differ from Super PACs in that the latter must disclose donors.

“If you are a donor looking to influence election but do not want to reveal your identity, the 501(c)(4) is an attractive option through which to send your cash,” writes the Washington Post.

Also, contributions to Onward “are not tax deductible as charitable contributions or as business deductions” as a result of the 501(c)(4) status.

NTKNetwork notes: “In October 2015, during a town hall meeting in Iowa, Clinton called 501(c)(4) groups ‘unaccountable dark money,’ and even used the left’s favorite boogey-men, the Koch brothers, as an example of a group that operates this kind of organization.”