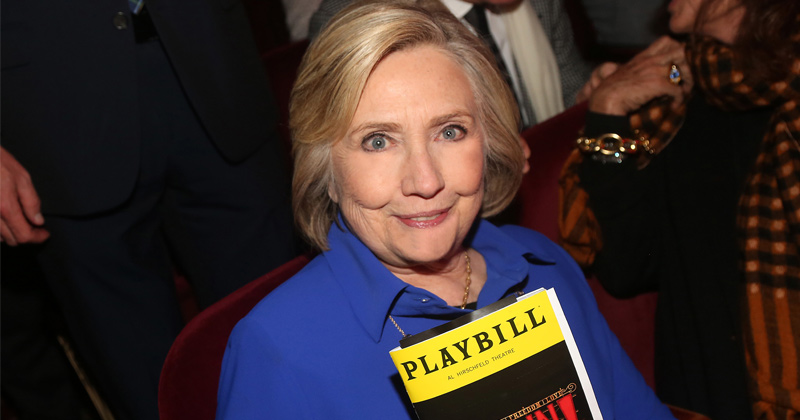 The former First Lady just can’t let it go. The belief that the presidency was denied her in 2016 by a thousand conspiracies is tempting her to enter the 2020 race at a time when Democrats desperately need new blood.

With uncanny timing, Hillary Rodham Clinton has hit the international talk show circuit, triggering heated speculation that she may be planning a last-minute plunge into the Democratic primaries against a disappointing field of nominees.

The temptation of getting another shot at Donald Trump, who beat Clinton in 2016 despite losing the popular vote, appears to have become an idée fixe for the former secretary of state.

On the UK’s Graham Norton Show, Clinton gave a very unconvincing denial that she was entertaining any presidential ambitions when she commented, “Right now, I’m not, at all, you know, planning that. I’d have to make up my mind really quickly, because it’s moving very fast.”

But not too fast for media mogul Michael Bloomberg, it should be noted, who announced his bid for the Democratic Party’s nomination on November 24.

Was Hillary testing the swamp waters, monitoring the public Richter scale to the faintest indication she might consider entering the race? Or was this just an effort to promote her work of nonfiction, ‘The Book of Gutsy Women’, which – coincidentally or otherwise – brings to mind a similar book written by John F. Kennedy entitled ‘Profiles in Courage’ that was published not long before JFK was elected president? In any event, the Clinton road show continues to plod along at a time when the Democratic primaries are entering the hot, critical phase.

Next stop for Clinton was the Howard Stern Show, home to some of the loudest and most lecherous radio programming allowed by law. All things considered, one would have expected the potty mouth Stern to pillory Clinton, hold her feet to the proverbial fire and make her squirm in agony from a barrage of painful questions. As it turned out, however, the veteran interviewer proved himself to be just as much a left-leaning political tool as any other mainstream media outlet.

At one point, Stern gushed about how everything would have turned out just dandy in the empire had Clinton being elected commander-in-chief, saying, “You would have been spectacular! With all of your experience in foreign affairs! Would you be crushing NATO right now? I don’t think so.”

Experience in foreign affairs? Perhaps Stern was referring to the 2011 bombardment of Libya by US-led NATO forces, which led to the murder of Muammar Gaddafi at the hands of a street mob, to which Clinton, then secretary of state under Barack Obama, infamously joked, “We came, we saw, he died.” Or maybe he was referring to the time she crossed party lines and voted in favor of George W. Bush’s 2003 War in Iraq, which has been called the biggest mistake in US military history. Perhaps to the hawkish neo-liberals, those military disasters are considered admirable foreign policy work. But I digress.

Clinton’s surprise appearance on Howard Stern carried all the trappings of a shrewd political strategist behind that decision. After all, Stern himself has said that he “absolutely” believes he helped Trump win the presidency through his interviews.

“The way I helped Donald was I let him come on and be a personality,” Stern told George Stephanopoulos in May. “Whether you liked him or not, people related to him as a human being.” Therefore, by ‘risking’ an interview with the irreverent Stern, Hillary Clinton is attempting to establish better ‘street creds’, that is, a greater connection to the American electorate, proving that she is more than just another detached Washington politician with antifreeze running through her veins.

It may take more than just clever media appearances, however, to help Clinton rekindle public interest in her as the Democratic front-runner. After all, she still managed to lose the 2016 election despite the overwhelming majority of the mainstream media in her corner. Since then, however, Trump has suffered from four brutal years of relentless Democratic attacks on his presidency – including ongoing impeachment proceedings – so it would be surprising if Clinton were not viewing this as an opening for another presidential run.

Aside from knowing she has the undying loyalty of the media no matter what she does or doesn’t do, a brief look at the diminishing field of Democratic contenders must also give Clinton reason to be optimistic.

First, there is Joe Biden, 77, who seems to have literally lost his mind. When he is not nibbling on his wife’s fingertips at a political rally, he is reminiscing about children at the swimming pool making the ‘blonde’ hair on his legs get a rise. The only purpose for Biden still being around, as far as I can tell, is to keep much more qualified contenders, namely the anti-war soldier Tulsi Gabbard, undoubtedly the most presidential Democratic contender of them all, out of the limelight.

And then there is Elizabeth Warren. Even the first-rate deceivers of the mainstream media seem astonished at her apparent inability to tell the truth.

And what about the Democrat Socialist Bernie Sanders, who continues to surge in the polls – thanks largely to support from the younger population – and despite a heart attack scare just months ago? Clinton, who never forgave Sanders for not immediately supporting her candidacy after he dropped out of the 2016 race, has an explanation for that as well, which essentially boils down to – any guesses? – yes, Russia.

“You know, basically, [the Russians] were like, hey, let’s do everything we can to elect Donald Trump,” Hillary explained to Stern. “Those are words. And they also said ‘Bernie Sanders’, but, you know, that’s for another day.”

This brings us to Pete Buttigieg, 37, who has served as the mayor of South Bend, Indiana (population 318,000) since 2012. Despite this young man’s obvious intelligence and articulation, it seems that not even the American voter will be able to back a presidential candidate whose political experience is limited to running a local, small-town bureaucracy. In fact, that Buttigieg has made it this far in the Democratic race should be seen as nothing more than an embarrassing testament to the dearth of real political talent inside the Democratic Party.

Indeed, the fact that Hillary Clinton is still being increasingly discussed as the Democrats’ best hope for defeating Donald Trump speaks volumes about the problems now affecting the left. Presently, the Democratic Party is book-ended by extreme radicals on the far left (personified by the newly elected freshmen ‘Squad’), who are spearheading the warped social-justice victim mentality, not to mention, on occasion, full-blown socialism.

On the other side of the Democratic neighborhood, where the Hillary Clintons and Joe Bidens reside, big business and the military-industrial complex have staked a preponderant claim of representation.

What is sorely missing from the Democratic Party is a credible leader who can represent the more attractive middle ground – not hell-bent on identity politics and PC insanity, nor beholden to the military-industrial complex. Until such a leader is allowed to surface (and ‘allowed’ is the key word), the Democrats, with the full support of the complicit media complex, will continue talking about out-of-touch politicians like Hillary Rodham Clinton and Joe Biden to see them through these political dark ages.

Ezra Levant of http://rebelnews.com joins The Alex Jones Show to paint a bleak picture of the future of free speech.