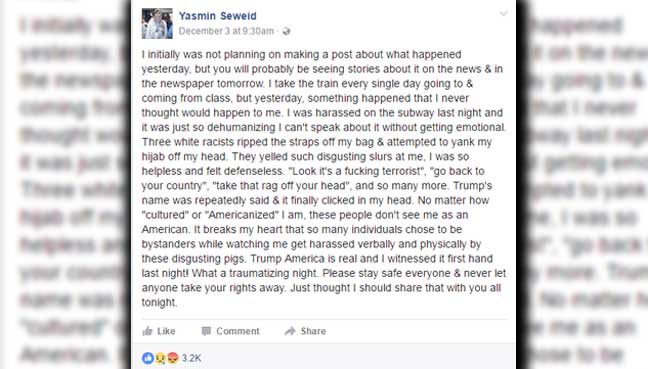 A Muslim teen who claimed she was attacked by a pack of rabid Donald Trump supporters has confessed to fabricating the story, according to police.

Earlier this month New York teen Yasmin Seweid, 18, claimed on Facebook that she was assaulted by “three white racists” who yanked on her clothes and repeatedly shouted Trump’s name as she rode the subway in Manhattan.

“I take the train every single day going to & coming from class, but yesterday, something happened that I never thought would happen to me, “she wrote. “I was harassed on the subway last night and it was just so dehumanizing I can’t speak about it without getting emotional. Three white racists ripped the straps off my bag & attempted to yank my hijab off my head. They yelled such disgusting slurs at me, I was so helpless and felt defenseless. ‘Look it’s a fucking terrorist’, ‘go back to your country’, “take that rag off your head’ and so many more. Trump’s name was repeatedly said & it finally clicked in my head. No matter how ‘cultured’ or ‘Americanized’ I am, these people don’t see me as an American.”

In a subsequent interview with the New York Daily News, Seweid doubled down on her tale, adding the Trump supporters also yelled, “You don’t belong here!”

“I born and raised in this country. I’m an American, you know?” she told the Times.

A headline carried by the newspaper read: “Attacked because I’m Muslim: Teen.” 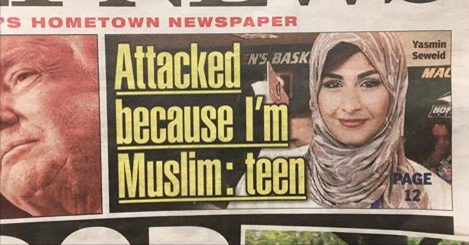 Only problem is, none of that happened.

After police were unable to locate witnesses or evidence to corroborate her story, Seweid came forward and admitted to fabricating the entire event, claiming it was a desperate ploy for attention.

Seweid finally recanted Tuesday, saying she misguidedly made up the tale to get attention because she was having issues with her family at home.

She was expected to be charged with filing a false report — which could range from a misdemeanor to a felony charges — late Wednesday afternoon, sources said.

A source explained that, given the amount of time detectives spent chasing the phony story, and how politically charged the allegation was, the police and prosecutors felt compelled to charge her, particularly since they said they had given her numerous opportunities to come clean earlier in the process. She repeatedly refused to tell the truth for weeks, they added.

The confession comes as police located Seweid after she was reported missing by the Nassau County Police Deparment last Thursday.

Her father, Sayeed Seweid, didn’t know what to make of Yasmin’s false story and disappearance.

“You try to raise your children as best you can,” Seweid told DNAInfo. “Maybe she was afraid that night. She was running late,” he added.

“She’s a bright, good girl. She’s young and maybe she was foolish here. Young kids, you know, you don’t understand their mentality.”

Seweid’s fake attack is yet another in a growing number of fabricated hate crimes sweeping the nation following Donald Trump’s historic presidential victory.

Watch Alex Jones’ break down on the left’s history of staging violence.

As noted by social commentator Mark Dice, fake hate crimes are a hallmark of the left’s obsession with victimhood politics.