Attorney General Eric Holder will today attempt to justify the Obama administration’s policy of state-sponsored assassination, as he prepares to give a speech explaining how the U.S. government can arbitrarily kill U.S. citizens on foreign soil. 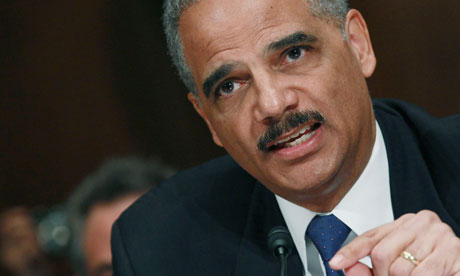 “Holder plans to say in a major speech on Monday at Northwestern University law school in Chicago that lethal force is legal under a Sept. 18, 2001, joint congressional resolution,” reports the Associated Press.

The notion that the White House can target Americans for summary execution by merely claiming that they are associated with terrorism is chilling given the fact that Americans who engage in political activism or even banal behaviors have been characterized as potential terrorists by U.S. authorities.

The White House has asserted the right to carry out state-sponsored assassination anywhere in the world without having to provide any evidence or go through any legal process. The administration merely has to state that the target is a terrorist and it doesn’t matter whether they are an American citizen or not, as we saw in the case of American-born Anwar al-Awlaki and his son, who were both killed last year.

In December, Obama administration lawyers reaffirmed their backing for state sponsored assassination, claiming that “U.S. citizens are legitimate military targets” and do not have the right to any legal protection against being marked for summary execution.

“So it’s the requirement of the administration under the current legal understanding that the president has to make that declaration, not you?” Panetta was asked, to which he replied, “That is correct.”

The administration’s support for state-sponsored assassination without a shred of legal oversight puts into context the worthlessness of an Obama ‘policy directive’ last week that promised the White House would not indefinitely detain American citizens under the National Defense Authorization Act, which Obama signed on New Years Eve.

As we documented at the time, it was the administration itself which demanded the controversial detention without trial provisions of the NDAA be applied to American citizens.

The NDAA defines the entire planet, including America, as a “battlefield,” meaning Americans could also hypothetically be assassinated without any legal process on U.S. soil under the legal framework that has been codified under Obama.

The recent announcement that up to 30,000 drones will be in American skies within ten years, allied to the DHS plan to spend up to $50 million dollars on a spy system that has been used to hunt insurgents in Iraq and Afghanistan for the purposes of “emergency and non-emergency incidents” within the United States, makes it clear that Americans are being targeted as terrorists at both home and abroad.