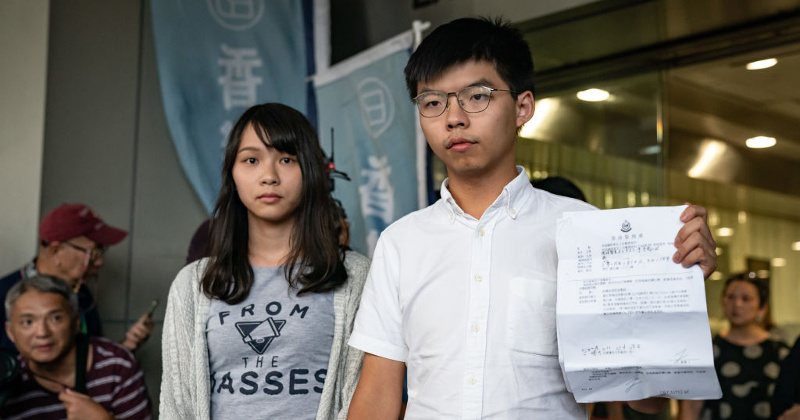 He urged the free world to stand by Hong Kong protesters against the long arm of China in the city.

Hong Kong democracy activist Joshua Wong urged an audience in the German capital on Monday to stand together with protesters in the city against the “Chinese autocratic regime.”

Speaking at a media-sponsored human rights event at the German parliament, one of the most prominent faces of Hong Kong’s pro-democracy movement likened ongoing protests to the role of Berlin during the Cold War.

The dehumanizing advancements in transhumanist evolution are being executed with impunity in China.

“If we are in a new Cold War, Hong Kong is the new Berlin,” Wong told the audience, including German Foreign Minister Heiko Maas.

The 22-year-old was arrested for 24 hours at Hong Kong airport on Sunday for allegedly breaching the terms of his bail and then he was freed to fly to Germany. He will travel onto the United States after the German leg of his tour.

In a Facebook post directly before he boarded the plane to Germany, Wong stated that during the trip he would advocate for a German version of the Hong Kong human rights democracy act and also campaign for an end to “the sale and export of weapons to the Hong Kong police.”

Wong has been an important figure in the anti-government protests which began on June 9. The protests were originally triggered by a draft law which would have allowed criminal suspects to be extradited to mainland China. Hong Kong Chief Executive Carrie Lam has since announced that the bill will be withdrawn.

Wong was detained in August along with fellow activist Agnes Chow. They were accused of encouraging and participating in illegal meetings in June, but were released on bail shortly after.

On Sunday, Wong told the German tabloid Bild that he was disappointed with how German Chancellor Angela Merkel acted on her recent visit to China. Merkel could have more “clearly called for free elections in Hong Kong” during her trip, said Wong.

Meanwhile, hundreds of uniformed school students, many wearing masks, came out in solidarity with Wong and other anti-government protesters. The students formed human chains in districts across Hong Kong.

“The school-based human chain is the strongest showcase of how this protest is deep rooted in society, so deep rooted that it enters through the school students,” according to Alan Leong, former student at Wah Yan College in Kowloon in Hong Kong.

Police say that they have arrested 157 people over the last three days, bringing the total number of arrests to 1,300 since the protests began three months ago.

Attorney Norm Pattis joins The Alex Jones Show to break down the push for a technocratic takeover of society.